Poll: Which Historical Figure Does Trump Most Resemble? 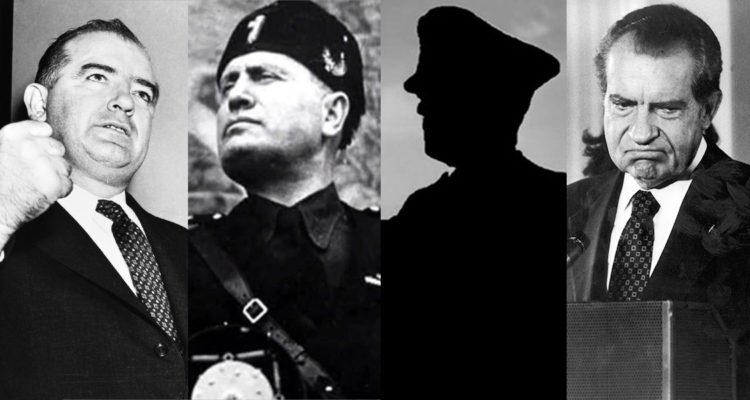 Today’s poll asks readers to choose which historic figure Trump most resembles. We will be posting the results later this weekend.

“Those who do not learn history are doomed to repeat it.” ~ writer and philosopher George Santayana

Reporting on the likely author of that quote, Big Think reported that, in its original form, the quote read, “Those who cannot remember the past are condemned to repeat it.”

Wikiquote reported that “a variety of [other] paraphrases and variants” have emerged over the years:

Continuing, Wikiquote reported that “there is a similar quote by Edmund Burke (in Revolution in France) that often leads to misattribution: ‘People will not look forward to posterity, who never look backward to their ancestors.'”

Today’s poll ask readers to choose which of four historic figures Trump most resembles in their estimation.

Biography reported that “undaunted by his shortcomings, McCarthy cast himself as an unrelenting patriot and protector of the American ideal. On the other side of the argument, his detractors claimed McCarthy was on a witch hunt and used his power to trample civil liberties and greatly damage the careers of leftists, intellectuals and artists.”

Here are a few examples of parallels between Trump and McCarthy that we explored in an article published in January 2016 titled “Mentored By An Aide To Joseph McCarthy – Donald Trump Embodies The Tyranny Of His Heroes.”

As with McCarthy, there is a lot we could say about Mussolini, but instead we are going to quote the first portion of an article about the Italian leader titled: “When investigators threatened his power, he declared himself dictator” that was published earlier this week by The Washington Post:

He threatened the press, joked about ruling for life and bullied everyone, including the allies who helped him get into office, while enjoying a cult following among his base. When a special judicial investigation threatened to reveal his financial corruption and complicity in criminal acts, he did not hesitate to destroy the democracy he led to remain in power.

Benito Mussolini created the world’s first Fascist dictatorship not just as a counter to the powerful Italian left — that’s a well-known story — but also as a desperate act to avoid prosecution….

Mussolini undermined the institutions and culture of Italian democracy persistently and methodically. He denounced any negative press coverage of him as “abusive” and “criminal,” and demanded that the offending reporters and editors be fired… He dismissed officials who were insufficiently servile. He bullied Parliament into passage of an electoral law that guaranteed his coalition’s victory in the 1924 elections. And he stayed silent when Fascists beat up or killed opposition politicians.

First of all we want to clear the air about the inclusion of Hitler as an option. The Guardian reported a few years ago about about an internet meme known as Godwin’s Law:

Back in 1990 – before users referred to the internet as the World Wide Web and a negligible number of mavericks held discussions on Usenet newsgroups, the Well, and Bulletin board systems (BBS) – Mike Godwin, then an Austin law student, created one of the first internet memes. It was called “Godwin’s Law of Nazi Analogies”, and the assertion went like this: “As an online discussion grows longer, the probability of a comparison involving Nazis or Hitler approaches one.”

Setting that aside, human rights group The Anne Frank Center took to Twitter last summer to post a comparison of Trump’s America and Hitler’s Germany which warned of “alarming parallels” between Trump and the infamous Nazi leader.

The Independent reached out to the Anne Frank Center’s director reporting that: “The post did not specifically mention Trump or Hitler but the center’s executive director said the comparison was intended.”

As the comparisons are well-known, with Special Counsel Robert Mueller closing in on the Trump administration, we are going to refer to a Politico article discussing Trump’s historical antecedents.

Trump is less populist, more demagogue, invoking the likes of President Richard Nixon. At least that’s what Sean Wilentz, George Henry Davis 1886 Professor of American History, says. “Trump is a Mixmaster blend of the right-wing Republican politics of the past 50 years. He literally recycles Nixon’s demogogy about ‘the silent majority’ and Reagan’s fantasy call to ‘’make America great again,’” Wilentz writes. “Trump is both the creature and exploiter of that radicalism, cynicism and kiss-my-ass bullying culture. He’s a dreamboat all the more attractive for his snarling vulgarity.”