Rosie O’Donnell: Trump Not ‘Legitimate,’ Has a ‘Serious Mental Disorder,’ ‘Should Be Impeached’ – Video 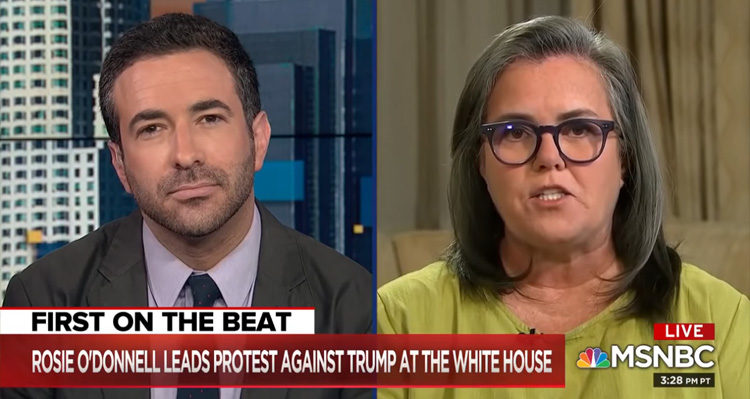 Television personality and activist Rosie O’Donnell is not holding anything back when it comes to her thoughts regarding Trump and his illegitimate presidency.

Rosie O’Donnell had a busy day on Monday, leading an anti-Trump singalong protest in front of the White House along with a group of Broadway stars.

As The Hill reported:

Comedian Rosie O’Donnell led a group of Broadway performers in a musical protest of the Trump administration Monday night in front of the White House.

“Let the president know in no uncertain terms that we are alive, awake and we are woke,” O’Donnell said to the crowd, part of an ongoing anti-Trump protest now on its 22nd consecutive night.

She also let loose during an appearance on MSNBC’s The Beat With Ari Melber where she discussed Monday’s protest along with her thoughts on the Trump presidency.

She tore into Trump, stating that he is not “mentally stable enough to run this country.”

Continuing, she stated, “When I watched the Helsinki summit and I, too, watched our president abandon our nation and be totally the betrayer that he is, I was horrified.”

He should not be president. I don’t believe he’s a legitimate president. I believe if it weren’t for Russia he never would have won. And the reason he’s not so panicked about Russia, he knows they will try again to do exactly what they did in 2016. Although the mainstream media won’t say it yet, they actually gave him the election. I believe that firmly and I think a lot of people do.  I think the mainstream media is slowly coming around to where the people actually are. It took you a long time to call him a liar, and the man has been lying a long time since in office. I think Helsinki was the last straw for a lot of people. It’s like forget it. You can’t get more blatant than he did right there, swore his allegiance to Russia. I believe he should be impeached. I’m sickened by Congress that doesn’t call for impeachment when we have horrible evidence of his high crimes and misdemeanors.

She also discussed Trump’s angry tweets about her, stating that: “He’s a horrible, horrible human with no soul. He has a very serious mental disorder.”

Hollywood Reporter elaborated on the interview, reporting that O’Donnell also tore into the press for treating Trump and Democratic rival Hillary Clinton as if they were equals.

“Mainstream media treated him like a legitimate candidate as if they were two equals, Hillary Clinton and Donald Trump, and it was falsehood from the start,” she stated.

Hollywood Reported also noted that she called for Trump’s impeachment:

Continuing to slam the media for being “lifetime civil servants” to Trump, O’Donnell also called for Congress to impeach the president for he has a “serious mental disorder.”

“Nobody would stand up to him, and they would let him,” O’Donnell said. “It was as if only Rosie O’Donnell could’ve been the 700 girls who are missing from the border, only Stormy Daniels, only all these Mexicans he derides and diminishes every chance he gets.”

You can watch her full interview in two parts, below: