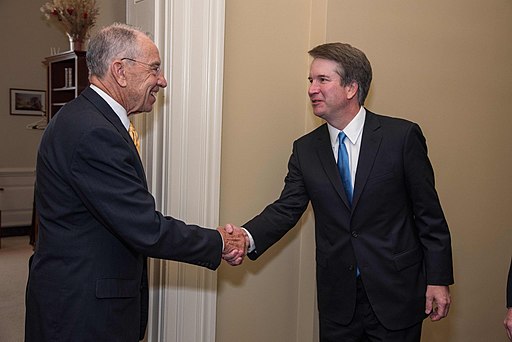 The American Bar Association calls on the Senate Judiciary Committee to cancel their scheduled vote on Brett Kavanaugh until a thorough FBI investigation can be completed into the sexual assault allegations.

CNN reported shortly before midnight Thursday night that they had obtained a copy of a letter from the American Bar Association (ABA) to Senate Judiciary Chairman Chuck Grassley and ranking Democrat Dianne Feinstein calling on them to halt the confirmation vote for Brett Kavanaugh until the FBI has time to complete an investigation into assault allegations lodged against the embattled Supreme Court nominee.

The Washington Post also reported on the letter, adding that additional pressure was being mounted from an unlikely source – Alan Dershowitz.

Also calling for an FBI probe was Harvard Law School scholar Alan Dershowitz, often lauded by President Trump for his criticisms of the the probe into Russian meddling in the 2016 election.  “Maybe we can get closer to the truth, although that is not certain,” Dershowitz wrote in a Fox News opinion piece.  “But right now there are too many unanswered question[s] to bring the confirmation of Kavanaugh”  to “a vote of the Judiciary Committee as scheduled on Friday, much less to a vote of the full Senate.” It is “possible that one of them is deliberately lying. Right now, there is no way of knowing for certain, which is why the FBI needs to talk to the judge’s accusers and others.”

Although The Washington Post predicted that the American Bar Association letter was “unlikely to sway Republicans,” it did seem to offer a glimmer of hope, adding that: Kavanaugh himself “referenced his good standing with the ABA multiple times as he angrily denied Ford’s allegations” during Thursday’s hearing.

“For 12 years, everyone who has appeared before me on the D.C. Circuit has praised my judicial temperament. That’s why I have well unanimous, well-qualified rating from the American Bar Association,” Kavanaugh testified.

Continuing, The Washington Post added that Republican Senator Lindsey Graham and Kavanaugh both referred to the ABA during Thursday hearing:

“For 12 years, everyone who has appeared before me on the D.C. Circuit has praised my judicial temperament. That’s why I have well unanimous, well-qualified rating from the American Bar Association,” Kavanaugh testified.

As part of its review of Kavanaugh’s qualifications, the ABA’s Standing Committee on the Federal Judiciary found that Kavanaugh  “enjoys an excellent reputation for integrity and is a person of outstanding character,” contributing to its unanimous “well-qualified” rating. Kavanaugh and Graham together alluded to the ABA investigation at least three times Thursday.