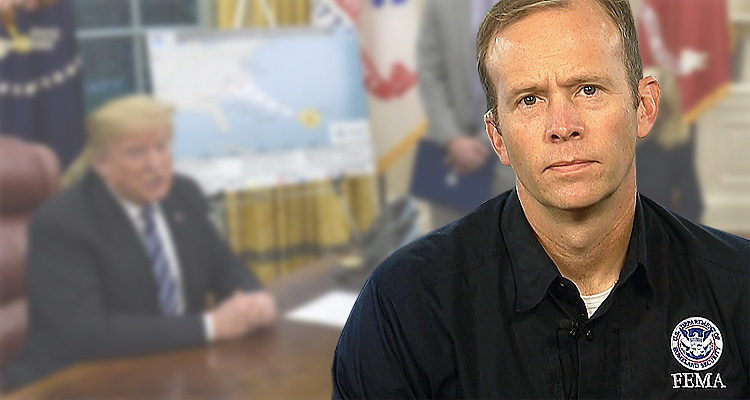 FEMA Administrator Brock Long appears to be scrambling to save his job by any means necessary in the wake of allegations that he misused government resources and amid rumors that Homeland Security Secretary Kirstjen Nielsen asked him to resign last month.

As you might recall, Trump spend much of last week singing songs of praise about relief efforts in the aftermath of Hurricane Maria which devastated Puerto Rico, killing nearly 3000 people as per the latest figures released last month.

Trump took to his twitter account, tossing a two-day Twitter Tantrum, denying that massive death toll as the Carolinas braced for the impact of Hurricane Florence.

3000 people did not die in the two hurricanes that hit Puerto Rico. When I left the Island, AFTER the storm had hit, they had anywhere from 6 to 18 deaths. As time went by it did not go up by much. Then, a long time later, they started to report really large numbers, like 3000…

…..This was done by the Democrats in order to make me look as bad as possible when I was successfully raising Billions of Dollars to help rebuild Puerto Rico. If a person died for any reason, like old age, just add them onto the list. Bad politics. I love Puerto Rico!

“When Trump visited the island territory last October, OFFICIALS told him in a briefing 16 PEOPLE had died from Maria.” The Washington Post. This was long AFTER the hurricane took place. Over many months it went to 64 PEOPLE. Then, like magic, “3000 PEOPLE KILLED.” They hired….

….GWU Research to tell them how many people had died in Puerto Rico (how would they not know this?). This method was never done with previous hurricanes because other jurisdictions know how many people were killed. FIFTY TIMES LAST ORIGINAL NUMBER – NO WAY!

At about the same time Trump was tossing his Twitter tantrum, Politico reported that Long was under investigation for the misuse of government vehicles; and The Wall Street Journal reported that the White House was considering replacing Long despite the fact that Hurricane Florence was growing in strength at the time.

Inexplicably, in the middle of that growing chaos, Trump tweeted out his thanks to Long for his support on Saturday.

Says the guy whom was confirmed to the position in June2017…which means you are the only president he has had support from so of course he has never had support like this before… also that seems back handed.."never had the support we have had from this president"..PR is proof

NBC News reported on Sunday that “FEMA Administrator Brock Long Sunday questioned the relevance of independent studies tying thousands of deaths to the aftermath of last September’s hurricane in Puerto Rico, echoing President Donald Trump’s criticism of those findings as Florence continues to batter the Carolinas.”

Appearing on NBC‘s “Meet the Press,” Long defended the president for his response to Hurricane Maria last year and argued that findings from multiple academic studies were “all over the place.”

Continuing, NBC News reported that: “Long attempted to distinguish the direct deaths from ‘indirect deaths,’ arguing that it would be tenuous to link those to the hurricane and the federal government’s response.”

“The GW study looked at what happened six months after the fact,” Long said, adding: “You might see more deaths indirectly occur as time goes on because people have heart attacks due to stress, they fall off their house trying to fix their roof, they die in car crashes because they went through an intersection where the step lights weren’t working.”

Making matters even more ridiculous and, in my opinion, making it even more transparent that Long was merely pandering to Trump to save his job, NBC News reported on the George Washington University study targeted by Trump and Long, noting that: “Puerto Rico Governor Ricardo Rosselló has accepted that analysis and declared that higher toll a ‘fact’ in a statement this week in response to Trump’s criticism.”

Not yet finished with singing his songs of praise for Trump, Long added that “One thing about President Trump is that he is probably the one president that has had more support for what goes on back here. And I think he’s defensive because he knows how hard these guys behind me work day in and day out for a very complex situation.”

Long made one final plea for his job, concluding by offering the following defense of his conduct:

I have a very critical and important role to make sure this government works on the nation’s worse day through continuity in government. These vehicles are designed to provide secure communications and the program was actually developed in 2008 — it ran for me the same way it’s run for anybody else. Its my understanding that maybe some policies were not developed around these vehicles that we will clear up.

A @fema director should be direct, honest and accountable. To downplay the death toll and continue to hide the real number of casualties while you spin for Trump in order to keep your job is despicable, Brock Long. Lives are at stake. #HurricaneFlorence #HurricaneMaria pic.twitter.com/iiFUu92ZXl

However, that might not be enough to save his job. As The Washington Post reported over the weekend, Long’s exit from FEMA could simply be on hold:

DHS and White House officials, including Chief of Staff John F. Kelly, have discussed replacing Long but decided to wait until Florence passes and the inspector general’s team completes its investigation, the senior administration official said.

Relying on interviews with 14 current and formal government officials and congressional aides, The Washington Post added that there was considerable alarm within FEMA regarding the timing of Long’s ouster from the agency due to the fact that there is no one immediately available to replace him.

The prospect of Long’s dismissal has alarmed current and former staff at FEMA and DHS, and it has captured the attention of officials on Capitol Hill, who note that the agency’s No. 2 position has been vacant for nearly two years and that Trump’s current nominee, Peter Gaynor, still awaits Senate confirmation…

FEMA’s third in command, Daniel Kaniewski, could take over, at least on an interim basis, if Long were to leave. But his background in policy and academia ­— and his lack of hands-on emergency management experience ­— has generated concern that an internal shake-up would unsettle the agency at the worst possible time.

“Who in their right mind thought this was a good idea to try to take out the FEMA administrator in the middle of a storm?” said one former top FEMA official, angry that the infighting spilled into public view with millions of Americans under threat from Florence. “Even if that’s your objective, save it for after the hurricane.”

With that in mind, although I do think that Long is defending Trump to save his own skin, that might not be such a bad thing for America given the current disaster relief efforts in the wake of Hurricane Florence.