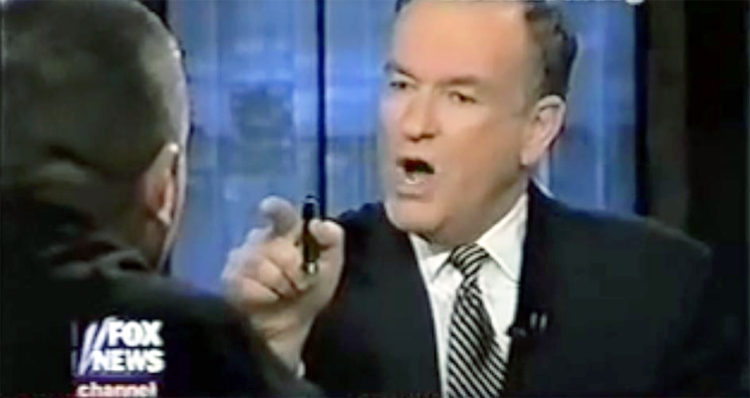 Bill O’Reilly goes berserk on 9/11 victims son, yelling at him and having security toss him off the set.

Here is an incredible clip from “Outfoxed: Rupert Murdoch’s War on Journalism“, a film by Robert Greenwald made in July of 2004.

The movie takes a long, hard look at the Fox News Channel and its owner Rupert Murdoch, claiming that the channel is used to promote and advocate right-wing views and argues this pervasive bias contradicts the channel’s claim of being “Fair and Balanced,” and that Fox News has been engaging in what amounts to consumer fraud.

This film also deconstructs instances where Fox News commentators such as Bill O’Reilly attempt to intimidate guests with whom they disagree, such as author and activist Jeremy M. Glick.

Jeremy M. Glick tragically lost his father, a Port Authority worker, in the attack on the World Trade Center on 9/11. He is one of 40,000 people who signed Not In Our Name’s “Statement of Conscience.” [Not in Our Name (NION) was a United States organization founded on March 23, 2002 to protest the U.S. government’s course in the wake of the September 11, 2001 attacks.] An excerpt from the statement reads:

“President Bush has declared: ’you’re either with us or against us.’ Here is our answer: We refuse to allow you to speak for all the American people. We will not give up our right to question. We will not hand over our consciences in return for a hollow promise of safety. We say NOT IN OUR NAME. We refuse to be party to these wars and we repudiate any inference that they are being waged in our name or for our welfare. We extend a hand to those around the world suffering from these policies; we will show our solidarity in word and deed.”

In the course of the interview, Glick said that the United States bore some responsibility for “training militarily, economically, and situating geopolitically” the Taliban and O’Reilly went nuts yelling “I’ve done more for the 9/11 families by their own admission — I’ve done more for them than you will ever hope to do, so you keep your mouth shut … Shut up. Shut up!,” eventually having Glick’s microphone shut off “out of respect” for his father’s death. You can see O’Reilly calling over security to have Glick thrown off the set at the end of the interview.

However, as you can see in the video, Glick is more than able to hold his own against O’Reilly and the interview is known as an O’Reilly take-down. See the thing is, Glick is not your usual O’Reilly guest. He has a PhD from Rutgers University in English, is an Assistant Professor at Hunter College who wrote a book on the Haitian Revolution and is the co-author of Another World is Possible.

You can watch the clip below, and you can go here for the transcript.