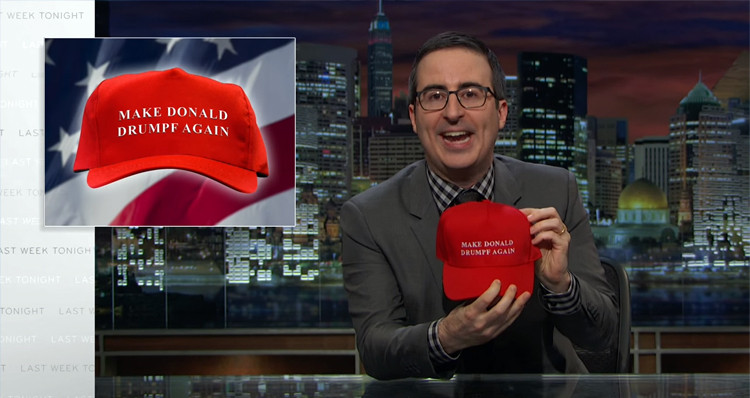 “Since 1988, every candidate who’s won the most states on Super Tuesday went on to become their party’s nominee,” Oliver noted during Sunday’s edition of Last Week Tonight. “At this point, Donald Trump is America’s back mole: it may have seemed harmless a year ago, but now that it’s gotten frighteningly bigger, it is no longer wise to ignore it.”

Oliver took on Trump’s lack of credentials, pointing to Politifact who have fact-checked 77 of Trump’s statements – rating 76 percent of them as “varying degrees of false.”

“Even when you can demonstrably prove Trump to be wrong, it doesn’t seem to matter,” Oliver stated, adding:  “You can hold his feet to the fire, but he’ll just stand there on the stumps, bragging about his fireproof foot skin.”

After discussing some of Trump’s many failed business ventures, Oliver points out that while many of Trump’s supporters have been bewitched by his prominent brand – in fact, Trump is not his real last name. It seems that a “prescient ancestor” changed the name from its original – less inspiring “Drumpf.”

“If you are thinking of voting for Donald Trump, the charismatic guy promising to ‘Make America Great Again,’ stop and take a moment to imagine how you’d feel if you’d just met a guy named Donald Drumpf: a litigious serial liar with a string of broken business ventures and the support of a former Klan leader whom he can’t decide whether or not to condemn,” Oliver explains.

He goes on to launch his “Make Donald Drumpf Again” campaign which includes all kinds of goodies to include a special “Drumpfinator” chrome extension and hats mocking the bigoted billionaire – all to be found at donaldjdrumpf.com.

You can watch John Oliver working over Donald Trump in the clip, below: