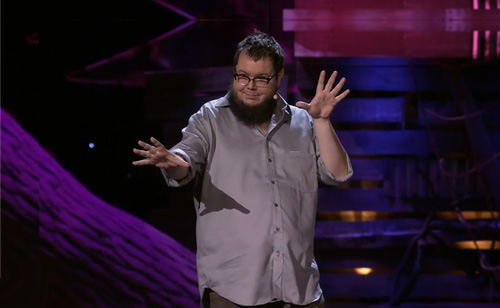 He’s the one who wrote the poem “To This Day” that was crowdsource-animated and then went super viral in 2013, reaching 10 million page views in a matter of weeks.

Here, he provides a little more background and then does a live version of the poem in front of a TED audience.

It’s one of the most moving TED Talks I’ve ever seen.

As TED notes on the video:

“By turn hilarious and haunting, poet Shane Koyczan puts his finger on the pulse of what it’s like to be young and … different.

“‘To This Day,’ his spoken-word poem about bullying, captivated millions as a viral video (created, crowd-source style, by 80 animators).

“Here, he gives a glorious, live reprise with backstory and violin accompaniment by Hannah Epperson.”

“My experiences with violence in schools still echo throughout my life but standing to face the problem has helped me in immeasurable ways.

“I wrote ‘To This Day’, a spoken word poem, to further explore the profound and lasting impact that bullying can have on an individual.

“Schools and families are in desperate need of proper tools to confront this problem. We can give them a starting point… A message that will have a far reaching and long lasting effect in confronting bullying.”

Watch this amazing performance, below: