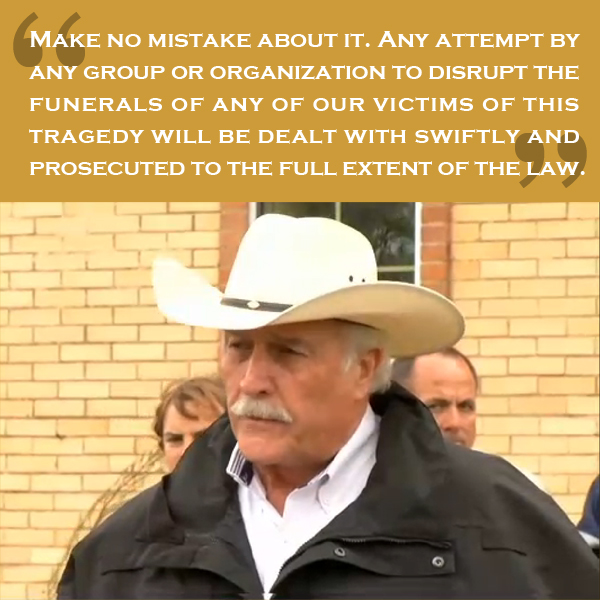 The Westboro Baptist Church get bested by a tough Texas sheriff.

Officials from the Bureau of Alcohol, Tobacco, Firearms and Explosives (ATF) held a press conference last week, announcing that the deadly fertilizer plant explosion in Texas in 2013 was  deliberate.

As CNN reports, “after conducting 400 interviews” and reviewing the “lab work on evidence, investigators determined someone started the fire on purpose.

Authorities would not comment on whether they know of a suspect. But “we’re headed in the right direction,” ATF Special Agent in Charge Robert Elder said. The ATF is offering up to $50,000 for information leading to the arrest of whoever set the blaze.

The April 17, 2013 explosion devastated the small town of West, Texas, located about 70 miles south of Dallas, destroyed 500 homes and killed 15 people, to include 12 first responders.

Snopes reports that shortly after the blast the “Westboro Baptist Church announced via Twitter its intentions to protest ‘any West, Texas funerals,’ including a 25 April 2013 memorial service at Baylor University in Waco, Texas, to honor twelve first responders who were killed trying to save others after the blast. The day before the service, McLennan County Sheriff Parnell McNamara publicly stated that he would not tolerate any disruption of the service by groups such as the WBC.”

We’ve been made aware that there could be individuals or groups who plan to picket or protest during the funeral services of our fallen heroes. Make no mistake about it, any attempt by any group or organization to disrupt the funerals of any of our victims of this tragedy will be dealt with swiftly and prosecuted to the fullest extent of the law. I’ve contacted district attorney Abel Rena and he has assured me of his cooperation in this matter. We’re simply not going to tolerate that.

There were rumors at the time that up to 20 members of the Westboro Baptist Church had been taken into custody by local law enforcement officials. However, as Snopes reports “although the Baylor service was attended by numerous dignitaries (including President Barack Obama and Governor Rick Perry of Texas) and was heavily covered by the media, we found no reports mentioning that WBC picketers had either made their way to the memorial service or had been arrested in an effort to do so.”

Additionally, “counter-protest groups who were on hand to discourage Westboro Baptist Church members from picketing another memorial service for a victim of the West explosion the day before the Baylor service reported that the WBC were no-shows at that event.”

Members of Maroon Wall for West and Red Wall against Westboro gathered to discourage Westboro Baptist Church from protesting at the memorial service for Captain Kenny Harris, a first responder to the West explosion.

The groups planned to meet after Westboro threatened to picket the funerals for those killed in the explosion, saying in a press release that the explosion was sent by God. The Walls sought to protect the grieving families and friends from the picket.

Around 220 people participated in the Walls — one at the memorial and one at the gravesite.

“It was really nice to show the family that the community is behind them,” said Sharon Colon, an organizer for Red Wall against Westboro. “We were able to accomplish our mission, which was to stand as a wall for the family.”

Despite the press release issued a few days prior to the memorial, Westboro Baptist Church did not show up.

“Westboro was not sighted,” said Ryan Slezia, organizer for Maroon Wall for West. “There was really no place for them to set up.”