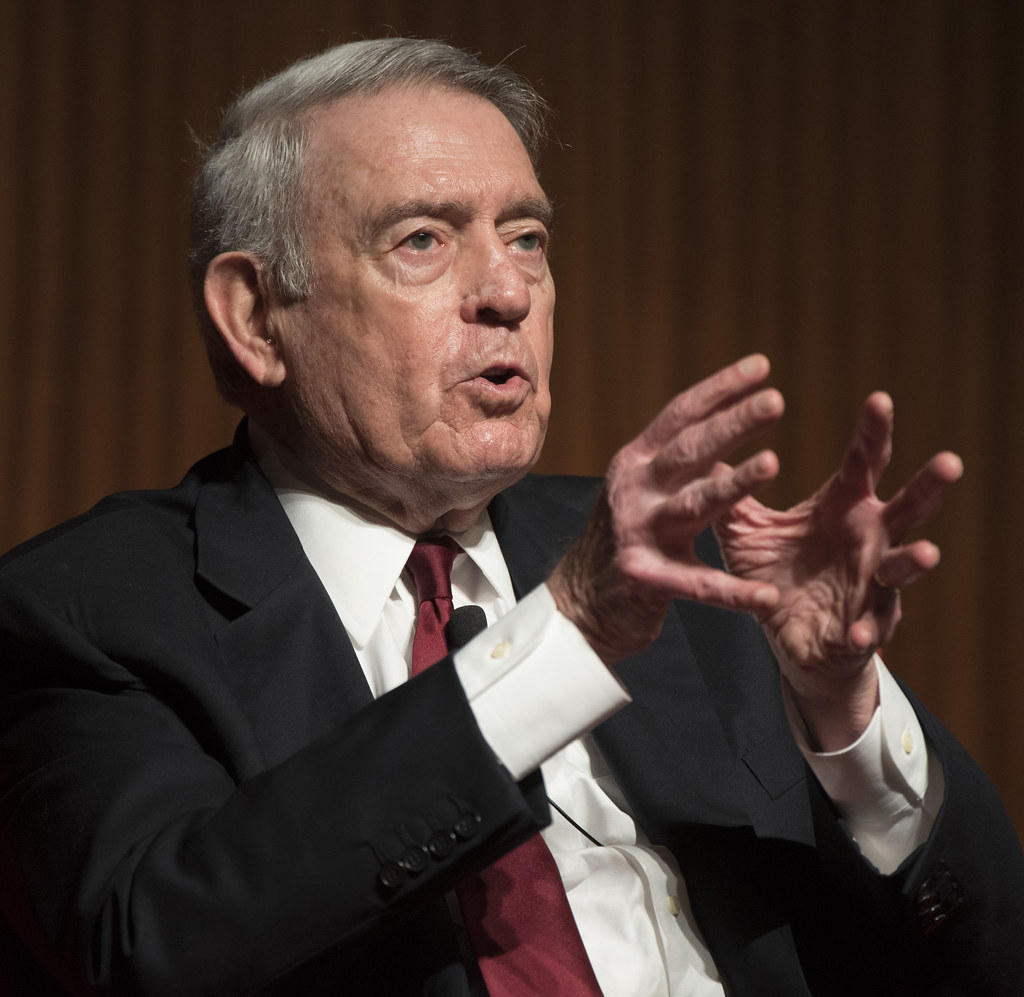 Rather began by stating that: “whatever civility once existed in our politics is tonight officially dead. Never in the history of televised debates have we witnessed such a show. And that’s what the Donald wanted. A show. He got it, but will he be seen as the hero or the villain?”

Taking note of what he called Clinton’s ‘crowning line,’ “I was prepared for this debate and I’m prepared to be President,” Rather went on to give his take on how the debate played out.

“From the very beginning, the body language tonight was striking,” he continued. “Hillary Clinton, the first woman ever to be on this stage was calm and substantive. Donald Trump interrupted often and slouched and sneered as he turned to address her. This is what Trump’s fans like about him, playing the alpha male at all costs. Clinton seemed completely unflustered, which is what her fans love about her. How this all plays to the majority of viewers and voters at home will be in the eyes of the beholder.”

Characterizing Trump as eager to launch an attack, Rather wrote that he “was surprised by how much this man who has made so much of the means of television spent not looking into the camera, but preoccupied with his adversary. Trump came across as amped, a pacing tiger ready to pounce on every answer. His Interruptions suggests little regard to the rules. He’s itching for a fight…Wants to swing wildly.”

Rather went on to observe that “Clinton clearly wanted to get under Trump’s skin,” attacking him for borrowing money from his father then claiming to be a self-made man, criticizing his business practices, stating that he was withholding his federal income taxes because he may not have paid any.

He continued his critique, pointing out that “Clinton was clearly the policy expert, nimbly jumping from topic to topic, policy to policy. But she was also much more able to paint a big picture than I have seen in times past. I thought she was particularly effective on the issue of race and especially the birther lie against President Obama. She had the facts on her side, but also it was an effective appeal to fire up her base.”

Rather talked about the “lofty ideals that served as a rallying cry for the founders of these United States to choose liberty over tyranny.” He spoke of Thomas Jefferson and his “self-evident truths,” that “Our Founders believed in reason and the power of intellect,” but that “Donald Trump made it clear tonight by his willful ignorance of important issues that he does not.”

He continued, warning that “Our founders feared the accumulation of power, they loathed vanity, and tried to build in protections against the demagogues who would appeal to mankind’s basest instincts. Donald Trump relishes in all of these impulses. For him they are instinctual and a prescription for success.”

And he concluded with the following admonition:

“To call Trump a con man, as many have, is a disservice to the art of the con. By its definition a con requires deceit. But Trump has not tried to hide his lies or the sheer unrealistic audacity of his cartoonish policy positions. He has asked the American people to bet on him. The fact checkers will certainly weigh in. The pundits will have their say. But the voters have all the information they need. The judgement is in their – or more accurately our – hands.”

And this isn’t the first time Rather has taken to Facebook to criticize Donald Trump. Indeed he has been doing so frequently the past few months, most notably on August 10th of this year when he warned that “history is watching” and declared Trump unfit to serve as president after Trump had hinted at the assassination of Clinton by gun rights supporters.

Last December, Rather criticized both Trump and former primary rival Sen. Ted Cruz (TX) for “confusing the bully pulpit with the BS pulpit” during an interview with MSNBC’s Rachel Maddow; and a couple of weeks later, Rather spoke with TheWrap host Stuart Brazel in an interview aired shortly before Christmas, telling her that Trump’s position on Muslims and Muslim immigration “is the greatest propaganda coup for ISIS in recent times.”