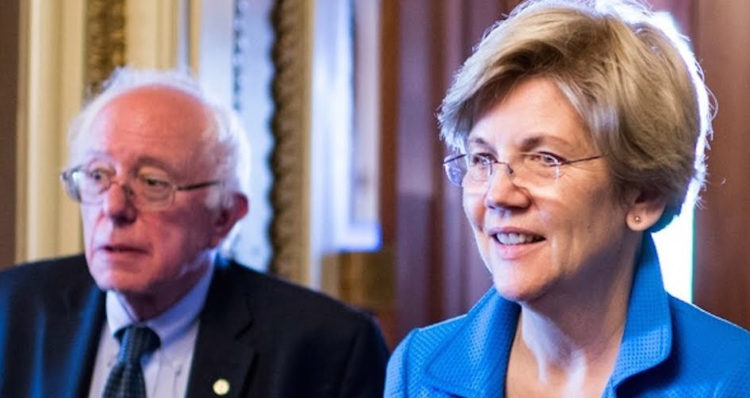 Progressive firebrands Senator Elizabeth Warren and Bernie Sanders hit the campaign trail in Ohio this weekend, issuing some of their harshest criticism so far of Donald Trump.

The Guardian reports that: Clinton’s primary rival Sanders delivered a stinging rebuke to the Republican nominee early on Saturday, telling a crowd at Kent University that “The cornerstone of Donald Trump’s campaign is bigotry.”

Warren blasted Trump later in the day telling a Columbus, Ohio, crowd that Trump was “a man with a dark and ugly soul.”

She went on to state that Trump “has more support from [the] Aryan nation and the [Ku Klux Klan] than he does from leaders of his own party.”

The Guardian pointed out that Warren’s remarks “echoed Clinton’s recent statement that ‘half’ of Trump supporters are ‘deplorable.'”

“To just be grossly generalistic, you can put half of Trump supporters into what I call the basket of deplorables,” Clinton said, adding: “Right? Racist, sexist, homophobic, xenophobic, Islamaphobic. You name it.”

Both Warren and Sanders addressed the recently controversy regarding Trump’s long-standing birther views.

As The Guardian reports:

“Donald Trump launched one racist attack after another against President Obama,” Warren said on Saturday, to boos. “Only when his handlers tied him down and forced him did he grudgingly admit” that Obama was born in the US, she said.

“Let me very clear about what the birther movement was,” Sanders told his crowd. “What they were trying to do – led by Donald Trump – is to delegitimize the presidency of the first African American president we’ve ever had. That is what that effort was. What an outrageous, racist attack against the president of the United States.”

Sanders addressed his concluding remarks to younger voters who might be tempted to sit out the election, warning that “I know, and you know, this nation has struggled too far and too long to overcome bigotry and discrimination. We are not going back.”