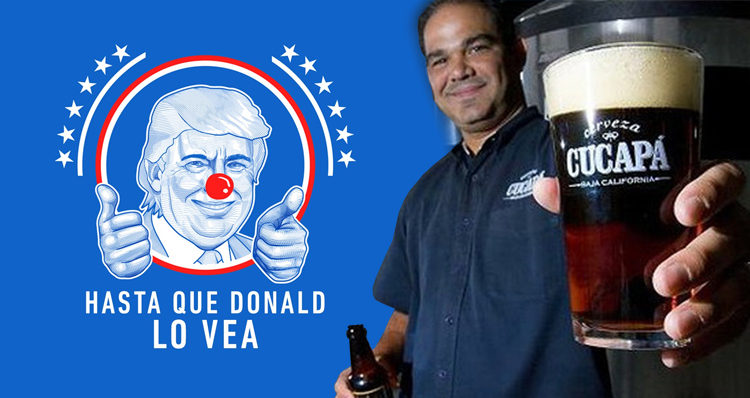 Gullible Trump supporters are tricked by a Mexican brewery selling what appeared to be pro-Trump swag.

A Mexican brewery came up with the perfect plan to trick unsuspecting Trump supporters into paying for a siesta.

Mario Garcia, the founder of Mexican craft brewery Cerveza Cucapa, tells Munchies that the idea for the ruse came to him “after that infamous clip where [Trump] said, ‘Mexico will pay for the wall, they just don’t know it yet.’ So we decided, ‘Well, Donald Trump is gonna pay for our beers, even though he doesn’t know it yet.’”

As Refinery 29 reports, “The brewery sent staff to Los Angeles where they tricked Trump supporters into giving them money for what appeared to be pro-Trump swag. Basically they set up shop and told people they wanted to build a wall of “chelas,” or beers. This, apparently, worked. One guy thought it was so funny that he joined in and helped sell shirts and hats on the Venice Boardwalk.”

Munchies elaborates on the plan, reporting that: “In a Spanglish-language video published on the day of the first presidential debate, Cucapá revealed its staff had conned Trump supporters in Los Angeles into buying what appeared to be T-shirts proclaiming ‘I Support Donald.’ What the buyers didn’t know was that in hot temperatures the wording on the T-shirts transforms into an anti-Trump message and his face resembles a clown’s.”

Unbeknownst to the buyers was that rising temperatures would lead the slogan on the shirts to change to “Donald el que lo lea,” a variation of a childish but well-known Mexican saying. The phrase makes little sense if translated into English (“Whoever reads this is Donald”) but García says they chose it precisely because it’s an in-joke that only Mexicans and Mexican-Americans will understand.

The video shows vendors selling the shirt to several individuals saying that they support Trump’s bid for the presidency and will be voting for him. One fan even joined in, helping to sell the t-shirts on the Venice Boardwalk.

Munchies adds that “García says they have not yet totaled up how many T-shirts they’ve sold, but the funds will go toward financing a huge party, most likely to be held in Mexico City in late October. Whatever’s left will be used to subsidize free beer giveaways across Mexico, ‘so that everyone gets a beer paid for by Donald Trump.'”

You can watch the video, below: