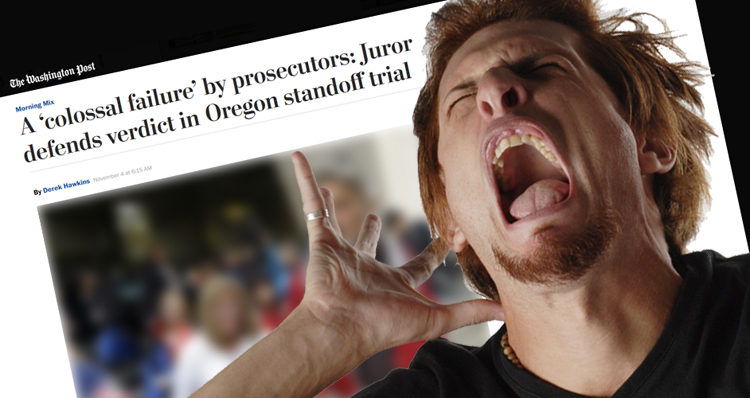 Describing the verdict as “a colossal failure by prosecutors,” The Washington Post reports that no one expected the not guilty verdicts handed down two weeks ago in the trial of the Oregon occupiers.

When jury deliberations began last month in the trial for Ammon Bundy and six others charged in the armed takeover of Oregon’s Malheur National Wildlife Refuge, a guilty verdict seemed all but certain. Even defense attorneys admitted they were pessimistic.

“You don’t walk into a federal court and win a case like this,” Matthew Schindler, an attorney for one defendant, told the Seattle Times. “It just doesn’t happen.”

A key juror, known only as “Juror 4”, stepped forward last week to explain the acquittal in a series of emails exchanged with The Oregonian.

In their intro to the transcripts of those emails, The Oregonian explains that Juror 4 “asked not to be identified for fear of retribution. The judge sealed the names of all nine women and three men on the jury, citing public safety.”

The Oregonian also provides the following information to make following the details of the emails easier: “Juror 4 makes references to U.S. District Judge Anna J. Brown; prosecutor Ethan Knight; Juror 11 who the judge removed from the jury after Juror 4 questioned his objectivity; Juror 18, who replaced Juror 11; and Ryan Payne, one of the leaders of the occupation with Ammon Bundy. He also references a Jan. 2 rally for Harney County ranchers and then the takeover of the refuge later that day.”

His initial email began with Juror 4 explaining that the verdict did not affirm any of the defendants’ actions or beliefs:

It should be known that all 12 jurors felt that this verdict was a statement regarding the various failures of the prosecution to prove “conspiracy” in the count itself – and not any form of affirmation of the defense’s various beliefs, actions, or aspirations.  Proving the elements of conspiracy, especially given the body of evidence we were forced to restrict ourselves to consider when judging, was far too great a standard to meet (without using our imaginations, prejudices, etc.).

Towards the end of that first email, Juror 4 once again explains that he blames the prosecution for the verdict, adding that the “not guilty” does not mean the defendants were innocent.

How could 12 diverse people find such agreement unless there was a colossal failure on the part of the prosecution?  Don’t they know that ‘not guilty’ does not mean ‘innocent’?

Asked by The Oregonian in a subsequent email “if there were turning points or particular moments in the trial that stuck out for jurors in helping the jury reach the not guilty pleas,” Juror 4 responded that “two major holes in the evidence record proved to cause insurmountable doubt” for him.

I expected there to be a witness to the January 2nd meeting at Ye Olde Castle before the protest/rally that would confirm the prosecution’s assertion of intent to impede, and the absence of such evidence became a seed of doubt that grew. I expected that there must be proof of conspiracy between Ammon and Ryan Payne (most logical link, owing to their initial visit to the Hammond’s place in early November) but he wasn’t even called for either side, nor were there any phone calls, emails, etc. that would demonstrate agreement here.

Asked his thoughts about Ammon Bundy’s testimony, Juror 4 responded that “it was clear that there was no juror who received Ammon’s testimony as fully honest, and several who felt manipulated. Even those who felt he was sincere in his beliefs found examples of inconsistency in his testimony.”

He went on to explain that visits to the Malheur National Wildlife Refuge by politicians lent credibility to the defense’s claim that the occupiers believed that their actions were not illegal, thereby blowing a hole in the prosecution’s conspiracy case.

A few outstanding things Ammon testified to stood out to me. There apparently were multiple attempts to meet personally with the F.B.I. by Ammon and yet no face-to-face meet up ever occurred, presumably because the bureau did not wish to have that sort of negotiation. And the lack of law enforcement/engagement throughout the occupation, coupled with the visits to the refuge by many politicians, caused me to see how occupiers could view their presence as something other than illegal.  Also, after watching an edited version of KATU’s Steve Dunn interview with Ammon at the refuge (this was played for the jury by Ammon Bundy’s lawyer), there seemed to be consistency of message/belief that I did not expect — especially if you have 9 months to ponder your defense, even I might alter my emphasis or eliminate something unfavorable. Because of the law’s wording, Ammon’s state of mind weighed heavily.

In what The Oregonian characterized as “the latest bizarre turn of events,” Oregon Representative Dallas Heard traveled to the refuge on January 9 with a coalition of five out-of-state elected officials that included Judy Boyle, Heather Scott and Sage Dixon of Idaho, and Graham Hunt and Matt Shea of the State of Washington. The trip was described by Heard as a “fact-finding mission” and occurred over the objections of Oregon Representative Cliff Bentz and Harney County Judge Steven Grasty. The coalition returned to Burns after a brief meeting with the militants.

All five of those politicians are Republicans as is Rep. Michelle Fiore of Nevada, who joined the meeting by telephone.