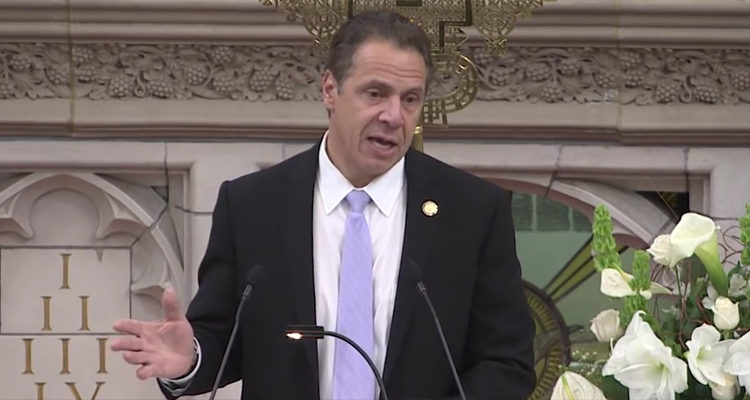 New York Gov. Andrew M. Cuomo announced a three-part action plan to protect civil rights and combat hate crimes in the state in the wake of an “uptick in reports of discrimination, bias-motivated threats, harassment and violence throughout the state,”in the wake of Donald Trump’s election victory.

Cuomo announced his plan to wage war against such injustices during a speech last week at Harlem’s Abyssinian Baptist Church, vowing to lead the country in fighting against the repressive politics anticipated to emerge from Washington D.C. now that Republicans will control all three branches of government.

“I come here today with a heavy heart,” he told the congregation during the announcement speech. “The ugly political discourse of the election did not end on Election Day, in many ways it has gotten worse, into a social crisis that now challenges our very identity as a state and as a nation and as a people.”

After discussing New York’s “special responsibility” as the “progressive capital” and “social conscience” of the country, Cuomo announced his plan to combat hate crime throughout the state.

“Today I am directing the State Police and the State Division of Human Rights to put together a special team of trained professionals that will investigate these hate crime incidents all across the state, the major ones, the minor ones, the infractions. And we will prosecute to the fullest extent of the law the perpetrators of any of this ugliness and divisiveness because it’s not happening in this state.”

Regarding the expansion of New York’s Human Rights Law, Cuomo stated: “The laws of New York must protect every citizen and every child. And that’s why this January I will propose to the Legislature to expand the Human Rights Law to specifically protect every child in every school, both public and private. We will make sure every young person knows the law of the land, and I will be sending a letter to every college student explaining their rights and responsibilities as citizens of New York. Their protections and their obligations and what they need to do to follow the law.”

Speaking of immigration, Cuomo defiantly declared: “If there is a move to deport immigrants, I say then start with me. I am a son of immigrants. Son of Mario Cuomo, who is the son of Andrea Cuomo, a poor, Italian immigrant who came to this country without a job, without money, without resources and he was here only for the promise of America.”

“New York will also ensure that every person has legal protections, whether they can afford it or not. We will be putting together a public-private legal defense fund to provide immigrants who can’t afford their own defense, the legal assistance they need because in New York, we believe in justice for all,” he continued.

Turning his attention to the greater issue of Republican ascension to power in Washington D.C., Cuomo went on the passionately declare that “New York still knows what America is supposed to be. And we must shout it from the mountaintops. We must provide guidance to this nation.”

We must stand up and say, “You spread fear and we will spread love.”

We will stand up and say, “You try pull us apart and we will stand stronger one with the other.”

We will stand up and say, “Yes we are black, we are white, we are brown – but we are one in people and in spirit.”

“Yes we are Christians and Muslims and Jews – but we are one as a community.”

“Yes we are gay and straight – but we are one.”

“Yes we are new immigrants and we are old immigrants, but we are one.”

“Yes we are individuals but we also believe that we are one community. And that is the New York way. We believe that there is a cord that connects you to you to you to you and that cord may be invisible but it is there. And it weaves a fabric and we call that fabric community and we believe in a community we invest in each other because when one of us is raised, we are all raised, and when one of us is lowered, we are all lowered. We have a shared destiny.”

You can watch Gov. Cuomo’s full speech, below, beginning with his prepared remarks: