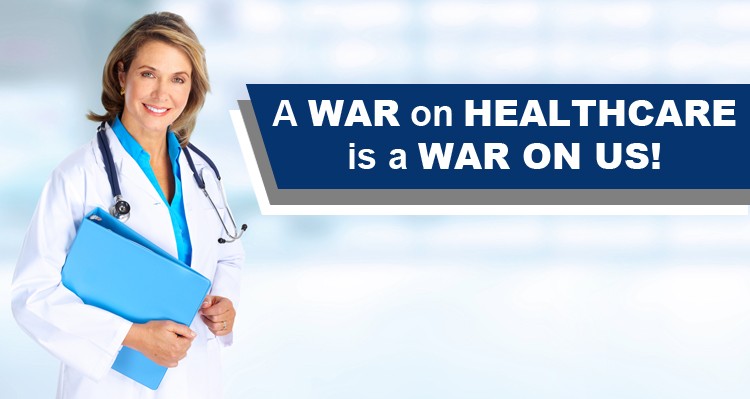 A war on healthcare is a war on America. If Republicans repeal Obamacare people are going to die, but Democrats can defeat them.

In the wake of the recent election and control of all three branches of government by Republicans beginning next year the threat to the Affordable Care Act has never been so real.

Although experts agree that dismantling Obamacare, as the bill is better known, is easier said than done – Republicans are eager to set the wheels in motion.

Speaker of the House Paul Ryan is currently pushing H.R. 3762, the Restoring Americans’ Healthcare Freedom Reconciliation Act of 2015, which he explains “dismantles the president’s health care law. It repeals the individual and employer mandates, the medical device tax, and the ‘Cadillac tax’ on high-value insurance plans.”

Michael R. Strain, a resident scholar at the American Enterprise Institute, a conservative think tank, exemplified conservative indifference to loss of life when he wrote an Opinion piece in the Washington Post last year titled “End Obamacare, and people could die. That’s okay.”

As Ann Werner reported last year, Strain argued that there was no immorality in yanking health insurance from those who were finally able to get coverage under Obamacare letting them die.

In a world of scarce resources, a slightly higher mortality rate is an acceptable price to pay for certain goals —including more cash for other programs, such as those that help the poor; less government coercion and more individual liberty; more health-care choice for consumers, allowing them to find plans that better fit their needs; more money for taxpayers to spend themselves; and less federal health-care spending. This opinion is not immoral. Such choices are inevitable. They are made all the time.

He then goes on to cite completely unrelated things like speed limits and homicides as examples of how government makes choices on a monetary basis to enact policy and sometimes those choices involve a higher mortality rate.

So is there anything Democrats can do to save Obamacare? Anything is possible and Quartz offered some insight as to how Democrats might accomplish that feat in an article they published last week.

As Quartz explains “Democrats were in a similar place after the 2004 reelection of former president George W. Bush. After being reelected with a popular vote majority, Bush was intent on spending his political capital,” and set his sights on the partial privatization of Social Security as his top legislative priority.

During his 2004 State of the Union Address he stated that:  Younger workers should have the opportunity to build a nest egg by saving part of their Social Security taxes in a personal retirement account. We should make the Social Security system a source of ownership for the American people.”

Republicans were in control of Congress with a 10-seat majority in the Senate and 30-seats in the House. Currently President-elect Donald Trump is looking at Republicans with either a 3 or a 4-seat majority in the Senate, depending on the outcome of Louisiana’s December 10th runoff election, and a 46-seat lead in the House according to Ballotpedia.

As Quartz reports, “less than a year after his reelection,” Bush’s privatization plan was “dead.”

Explaining how this happened, Quartz looked to a 2007 post-mortem analysis by William Galston of the Brookings Institute,  who attributed the collapse of Bush’s plan on three key factors that Quartz paraphrased as such:

According to Quartz, “Democrats can win” the upcoming fight to preserve Obamacare. They can accomplish this by

Democrats also have the substance on their side. Repeal will prove trickier than Republicans believe, especially if they want to keep the most popular pieces of the law. Democrats should let repeal-and-replace collapse while loudly and frequently reminding the public that rolling back Obamacare could cost up to 20 million people their health coverage and hike taxes on millions of people currently benefiting from subsidies on its exchanges.