December 5, 2016 by Samuel Warde No Comments 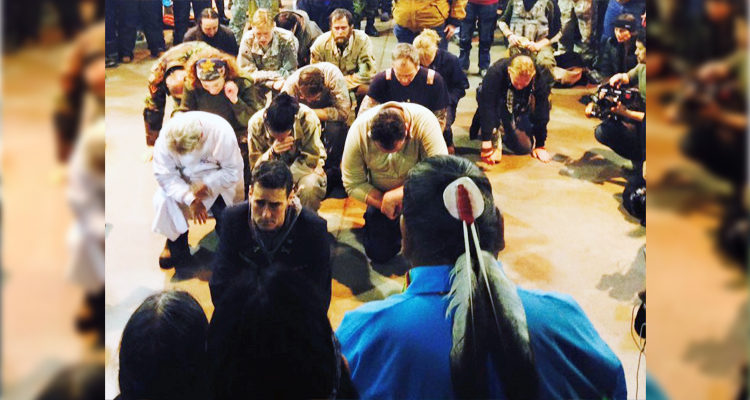 There was not a dry eye in the room as the veterans cried out World Peace! in a single unified voice.

A group of veterans defending the protesters at Standing Rock, North Dakota did something unexpected. They asked for forgiveness for the genocide and war crimes committed against the country’s tribal nations.

“I witnessed something powerful and profound today,” he began.

“Wes Clark Jr and the assembled veterans took a knee and collectively asked for forgiveness for the genocide and war crimes committed by the United States Military against tribal nations in this country.”

Salon posted the text of the full statement by Wes Clark Jr. as follows:

Many of us, me particularly, are from the units that have hurt you over the many years. We came. We fought you. We took your land. We signed treaties that we broke. We stole minerals from your sacred hills. We blasted the faces of our presidents onto your sacred mountain. When we took still more land and then we took your children and then we tried to make your language and we tried to eliminate your language that God gave you, and the Creator gave you. We didn’t respect you, we polluted your Earth, we’ve hurt you in so many ways but we’ve come to say that we are sorry. We are at your service and we beg for your forgiveness.

Leksi Leonard Crow Dog, a Sioux spokesman who gained national prominence during the takeover of the town of Wounded Knee on the Pine Ridge Indian Reservation in South Dakota in 1973, accepted the apology on behalf of the tribes in attendance, going on to ask for forgiveness “for any hurt that might have been caused” when the “Great Sioux Nation defeated the 7th Cavalry” on June 25, 1876 at the Battle of Little Bighorn, otherwise known as Custer’s Last Stand.

As John Eagle, Sr., noted: “All the veterans replied in a single unified voice, ‘WORLD PEACE!!!!'”

His post and accompanying photos has been shared nearly 5,000 times in the three hours since it was posted, gathering nearly 200 comments – mostly of praise.

Singer songwriter Tina Malia was also on hand for the event and posted a photo to Facebook, writing: “Just now: US Vets came forth and asked for forgiveness from the First Nations people. There was not a dry eye in the room.”

You can watch Wes Clark, Jr. asking for forgiveness in the clip, below: