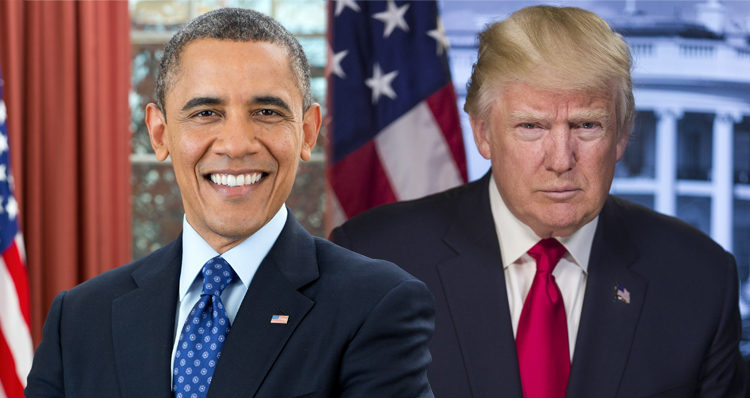 Trump criticized Obama for years, yet now that he is in office he seems hell bent on doing exactly the same things he slammed Obama for doing.

Trump was a thorn in Obama’s side the entire term of his presidency.

A leading force in the birther movement, there is little about Obama that Trump has not criticized over the years. However, the thing that Trump seems to have forgotten is that old adage that people in glass houses shouldn’t cast stones. And with his current job, his every word and deed are under a microscope as well as things from the past – that may very well come back to haunt him.

Here are but a few highlights of his years of hypocrisy regarding Obama.

In October 2012 Trump announced that he would donate $5 million to a charity of Obama’s choosing if he would turn over his “college records and applications, and passport application and records.” However, as the Guardian reported at the time, “While Donald Trump had no problem demanding that Barack Obama reveal details about his passport and time at college, … the billionaire business mogul proved rather less forthcoming when it came to a request for information about himself…. But when the Guardian contacted Trump’s office to ask for Trump’s college and passport records, it was accused of ‘trying to be funny’ and the request was deemed to be ‘stupid.'”

The Washington Post published a hard hitting piece last August, during the presidential campaign, noting that:

Years before he ran for the White House, Trump built his political brand by accusing President Obama of concealing his past. Trump called on Obama to release his college applications, transcripts and other records, asking how such a “terrible student” got into Ivy League schools. The business executive also demanded that Obama release his passport records and, most famously, his birth certificate, declaring in a video released before the 2012 election: “We know very little about our president.”

However, once again – Trump has not been forthright in releasing information about himself, ensuring that “Americans know relatively little” about himself.

He has refused to release many of the same documents that he demanded from Obama, including college transcripts and passport records. He has shirked the decades-old tradition of major nominees releasing their tax returns and other documentation to prove their readiness and fitness for office. And he has yet to release records showing why he received a medical deferment during the Vietnam War and whether he has actually donated the millions of dollars he claims to have given to charity.

Fast forwarding to today, Politico reports that all bets seem to be off regarding Trump’s previous criticisms of Obama that “the new [occupant of the White House], who attacked Obama for golfing and personal travel, spends his first month outdoing his predecessor.”

Donald Trump regularly assailed President Obama for playing golf, then spent the first weekends of his own presidency doing just that. He attacked Obama for using Air Force One to campaign, and did it over the weekend just a month into the job. He mocked Obama for heading out of Washington at taxpayer expense, but appears to have no qualms about doing so himself.

One month in, Trump is using the presidency to boost his political and personal goals — not breaking laws or ethics rules, experts say, but disputing his past criticisms and vows.

The new president has taken three weekend getaways in the first month of office, spending millions of taxpayer dollars in Secret Service protection and about 25% of his time away from the White House. The Secret Service has also paid for security for expensive business trips for his sons’ business ventures to foreign countries.

And consider this, things are only going to get worse over the course of time. Take for instance the issue Obama’s cost to taxpayers.

The Guardian reported today that the cost of security for the Trump family is soaring at an alarming rate.

According to The Guardian, “New York Senator Chuck Schumer has ramped up pressure on Donald Trump and the federal government to accept the mounting costs of protecting the president, the first family and their extended entourage.”

Schumer, the Senate Democratic leader, inserted himself into the debate on Sunday, saying it costs $500,000 per day for nearly 200 police officers to protect Trump Tower on Fifth Avenue in Manhattan, which houses the Trump family business headquarters and serves as the home of the first lady, Melania Trump, and the couple’s son, Barron. The senator estimated the cost could rise to as much as $183m annually.

At current estimates, even a four-year Trump administration could be heading for a billion dollars in taxpayer-borne costs – an eight-fold increase of the $97m Judicial Watch, a conservative watchdog group, estimates it cost to protect Barack Obama over the two terms of his administration.

Yet this is what Trump had to say in a 2012 tweet about Obama:

As Politico reports “Trump has also headed to the golf course at least six times since he took office, another favorite criticism against Obama. Trump mocked Obama more than two dozen times for golfing amid problems in the White House.”

In 2014 this is what he tweeted about Obama:

So far, Democrats have said little about the costs associated with the Trump family, his golfing ventures or his vacations – but at the grassroots level there is much that can be done, such as the recent spate of protests at town hall meetings from coast to coast, rallies supporting Planned Parenthood in the face of anti-woman anti-choice rallies…. There were the protests after Trump’s inauguration that spanned all 50 states and around 30 countries scattered all over the world. There is a push for individuals to contact their representatives in Congress and tell them what they think about Trump’s regressive policies, about the plan to dismantle the Affordable Care Act.

Democratically elected U.S. House Speaker Paul Ryan has turned off all of his public telephones and fax machines due to overwhelming protests in favor of Obamacare, Planned Parenthood, and Medicare. He is also turning away voters delivering signed petitions.
So here is the new tactic:
Please mail postcards to his HOME address:
PAUL RYAN
700 ST. LAWRENCE AVE.
JANESVILLE, WI 53545
Please paste and copy this info and share.
Let’s see what 67 million cards in the driveway looks like