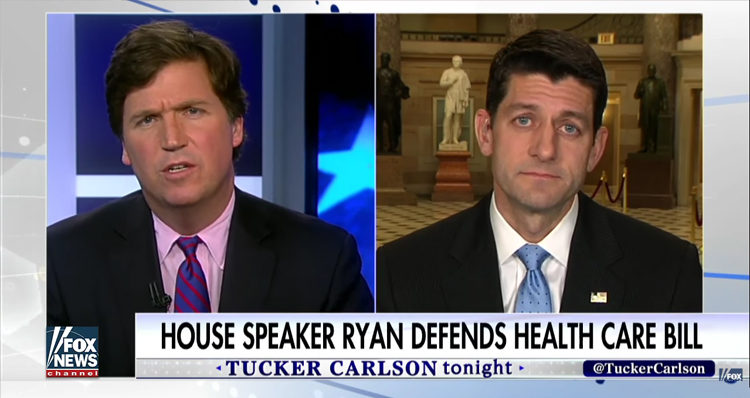 Paul Ryan unsuccessfully tries to counter perception that chaos has surrounded the GOP-led Congress, claiming that Republicans are going through “typical growing pains” of being the governing party.

It seems that even Fox News is getting frustrated with the Republican-led Congress.

Tucker Carlson pressed Republican Speaker Paul Ryan during an interview this week about the Republican health care bill that will “send more money” to richest Americans and asked him why the House of Representatives is only working 8 days in April despite the fact that the GOP-led Congress has had so much difficulty enacting Trump’s agenda so far.

Ryan tried to deflect the question, claiming that everything was going smoothly and according to plan, expressing confidence that Republicans would get enough votes in the Senate to pass the new healthcare plan.

As Salon reports, “Even if the GOP establishment were able to whip up enough votes to begin the plan’s first phase to repeal and replace Obamacare, Carlson did not sound convinced this made for good politics. He singled out the net investment income tax that Ryan’s health care bill would eliminate and thereby save thousands for couples making over $250,000 a year.”

“Let’s get to the tax policy. So as I understand it, and I’m just reading this so I may have it wrong for there’s an investment tax in here, the net investment income tax. And as far as I know it only kicks in on couples making more than a quarter million dollars per year. So it’s a tax on wealthy investors. And you’re eliminating it in a health care bill. My question is looking at the last election was the message of that election really we need to help investors? I mean, the Dow is over 20,000, are they really the group that needs the help?”

Clearly not buying that argument, Carlson noted that:

“The overview here is that all the wealth basically in the last ten years is stuck to the top. That’s one of the reasons we’ve had all this political turmoil as you know. It’s so, kind of a hard sell to say yeah, we’re going to repeal Obamacare but were going to send more money to people who have already gotten the richest over the last ten years, that’s what this does, no? I’m not leftist, that’s just true.”

In the second part of the interview, Carlson pressured Ryan, asking him why the House is scheduled to work only 8 days in April although the GOP-led Congress has had difficulty enacting Trump’s agenda.

Carlson began by pointing out that Congress was able to enact much of Obama’s agenda by this point in his presidency.

Ryan dismissed that observation, again claiming that things were going according to plan.

The two of them continued sparring with Carlson repeatedly asking Ryan to point to any significant pieces of legislation that have been signed into law by Trump – and with Ryan unable to do so.