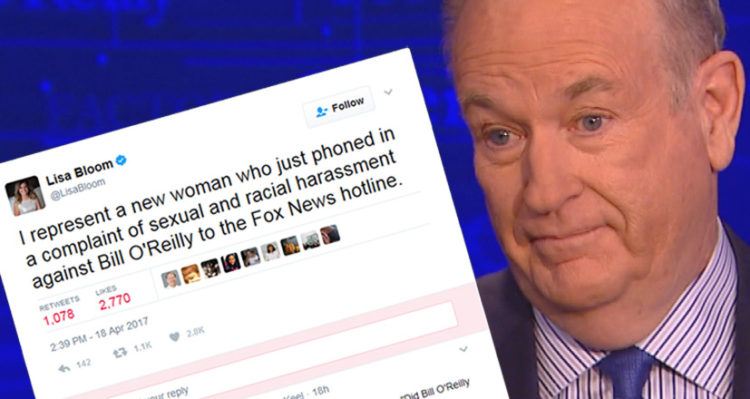 O’Reilly reportedly leered at the African-American woman and called her “hot chocolate.”

A slew of advertisers have fled “The O”Reilly Factor” in the wake of a recent New York Times article which revealed that host Bill O’Reilly and Fox News have paid out a total of $13 million since 2002 to five women who alleged inappropriate behavior by O’Reilly; and Salon reported this Tuesday that the Murdochs are reportedly turning against the embattled host as protests mount against him.

According to Salon, “While a recently released survey found that only 17 percent of Fox News viewers said they believe O’Reilly’s show should be canceled, Fox News executives are very alarmed by a drop in ad revenue, according to reports.”

In a stunning new development, new allegations of harassment at the hands of O’Reilly have been disclosed by the woman’s attorney, Lisa Bloom.

I represent a new woman who just phoned in a complaint of sexual and racial harassment against Bill O'Reilly to the Fox News hotline.

The Hollywood Reporter spoke with Bloom, detailing that conversation in an article published this Tuesday.

According to The Hollywood Reporter,

Bloom went on to explain that her client, who chooses to remain anonymous, is not seeking any money. “She just wants [Fox News] to know her story.”

Bloom told The Hollywood Reporter that she spoke with three witnesses who knew the woman at the time and confirmed her distress.

“She was afraid if she told him to knock it off she’d get fired,” Bloom said. “Now that’s she’s aware this is all in the news, she’s decided to phone in a complaint to the Fox News hotline.”

O’Reilly attorney Marc E. Kasowitz responded with a statement to CNN reporter Dylan Byers which read: “It is outrageous that an allegation from an anonymous person about something that purportedly happened a decade ago is being treated as fact, especially when there is an obviously orchestrated campaign by activists and lawyers to destroy Mr. O’Reilly and enrich themselves through publicity driven donations.”

Protesters gathered outside the network’s headquarters in Manhattan on Tuesday to demand that Fox News fire its star anchor O’Reilly. Yet President Trump defended O’Reilly earlier this month, calling him “a good person.”

What a great reminder that the month of April is Sexual Assault Awareness Month.

The Hollywood Reporter concluded their article reporting that “Kasowitz, who is a longtime attorney for Donald Trump, did not respond to a request for comment.”