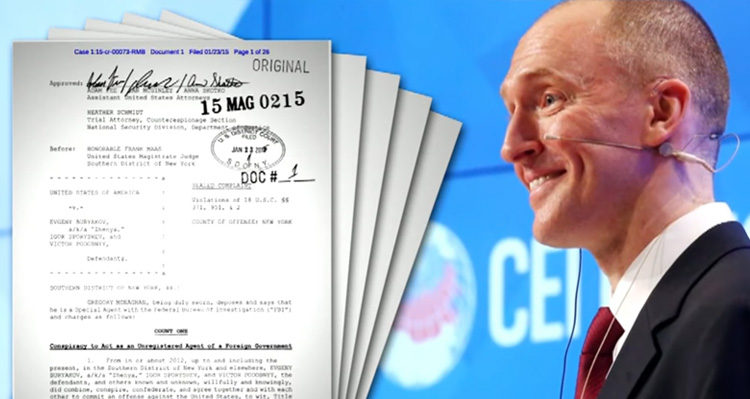 The Russian spies who met with Trump campaign advisor Carter Page planned to get him to commit treason and then refuse to pay him afterwards.

The Washington Post reported earlier this month that “the FBI obtained a secret court order last summer to monitor the communications of an adviser to presidential candidate Donald Trump [as] part of an investigation into possible links between Russia and the campaign, law enforcement and other U.S. officials said.”

According to Foreign Policy, Page was identified as “Male-1” in a 2015 secret criminal complaint, and BuzzFeed News reported that “Page confirmed to BuzzFeed News on Monday that he is ‘Male-1’ in the court filing.”

Foreign Policy elaborated on the recorded conversation, reporting that Podobnyy told Sporyshev, his boss, that “It’s obvious that [Page] wants to earn lots of money.”

As The Washington Post reported: “Page has not been accused of any crimes, and it is unclear whether the Justice Department might later seek charges against him or others in connection with Russia’s meddling in the 2016 presidential election. The counterintelligence investigation into Russian efforts to influence U.S. elections began in July, officials have said.”

Citing a CNN report, The Guardian reported today that:

New allegations that federal investigators have gathered intelligence that suggests Russian operatives may have used Page to try to gain access to the Trump campaign follows a separate report by the Washington Post that he was being monitored by the FBI last summer because of suspicions about his ties with Russia.

Page has denied wrongdoing. He acknowledges that he might have shared information with Russians but has insisted that the information was innocuous.

Continuing, The Guardian reports that:

By his own admission, the former adviser met top Russian officials at Rosneft, the Russian state oil firm, as late as last December, shortly before the company announced it was selling a 19.5% stake to Glencore, among other investors.

Page told Russian media at the time that he had the “opportunity to meet with some of the top managers of Rosneft”. He also suggested that the deal, which involved an investment by a Qatar fund, was a good example of how US companies were being kept from pursuing opportunities because of US sanctions against Russia.