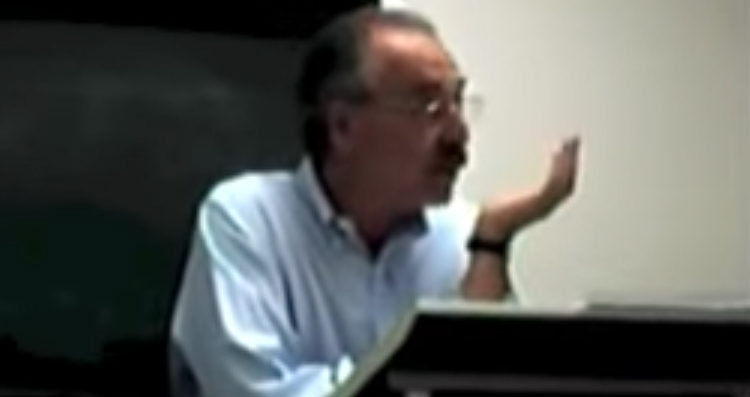 A political science professor at the University of Southern California delivered sustained attacks on Republicans, characterizing them as old, white, racist, and losers.

The video was reportedly recorded during the fall semester of 2012 prior to the election and was posted on YouTube by well-known conservative propaganda website Campus Reform; however, the professor’s words are relevant today – possibly more so than at the time.

“Republicans are trying to prevent people of color and people of lower income from voting by requiring voter ID. The Republican Party in California as I say all the time, on the record, in print, and on radio, and on TV, is the last vestige of angry old white people,” he said.

The recording also captures Sragow making dozens of other derogatory remarks about Republicans and Republican politicians such as:

Mark Vafiades, chairman of the Republic Party of Los Angeles County, told KABC-TV that: “We’re being defined by someone who himself is a racist by calling us a racist,” adding: “They’re supposed to be giving them a balanced approach on the issues in life and instead this guy is using his bias and trying to project that on the young kids who are trying to learn.”

USC Daily Newspaper, The Daily Trojan, reported at the time that “Elizabeth Garrett, provost and senior vice president for academic affairs, responded Friday to the video by highlighting the importance of the faculty’s ability to express their opinions but also the need for careful judgment.”

“Faculty members are entitled to freedom in the classroom in discussing their subjects, and they also have the responsibility to exercise critical self-discipline and judgment in transmitting knowledge,” Garrett said in a statement.

Her full statement reads as follows:

“Regarding a video clip of excerpts from a part-time teacher’s lectures in a political science elective class, at USC we strive to hold ourselves to the highest standards of rigor and professionalism in our classes.  There are established faculty processes to determine whether a course meets those shared standards.  Our faculty endorse, through our Faculty Handbook, the principles that academic freedom in teaching is fundamental and that it carries with it duties correlative with rights: faculty members are entitled to freedom in the classroom in discussing their subjects, and they also have the responsibility to exercise critical self-discipline and judgment in transmitting knowledge.
“The freedom to take unpopular positions and the freedom to express those positions publicly are at the foundation of what it means to be a faculty member of a university.  One of the most important principles of an academic community has been that academic inquiry and discussion be free from censorship or undue outside control.  Statements made by our faculty members are not endorsed by the University; indeed, we sometimes profoundly disagree with the statements.  Nevertheless, we firmly protect their right to express those views.”

You can watch Talgo’s recording in the clip below: