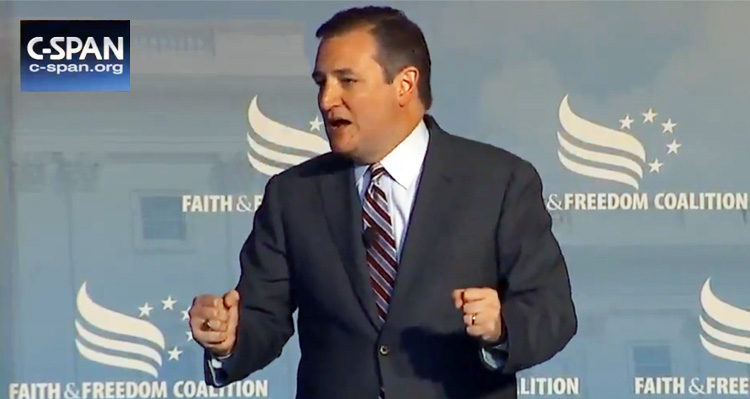 Even the Freedom and Faith Coalition seems to have had enough of Ted Cruz.

Tea Party favorite Ted Cruz  was in the middle of giving a speech at the Faith and Freedom Coalition’s annual conference on Thursday when all of a sudden a voiceover announcing the next speaker interrupted the Texas Senator.

An impassioned Cruz was in the middle of making two points when the announcer cut him off and the next speaker, Faith & Freedom Coalition southern regional director Virginia Galloway, took the stage.

Noting that “Cruz “is like a robot built for exactly this kind of event, ready to serve up red meat about liberty and good Christian values to a hungry audience,” Esquire best describes what happened next:

But it seems one listener got a little sick of the dog-and-pony show from Cruz, a man who once preached about the evils of “New York values,” then made sad canvassing calls on behalf of the New Yorker who whooped him in the Republican primary, insulting Cruz’s wife and insinuating his father was involved in the JFK assassination along the way. That listener was the event’s announcer, who, after Cruz got through just one of his two Big Major Points for the audience, announced the next speaker and started bumping ’80s synth music that was surely rejected from either the Beverly Hills Cop soundtrack or an 8-bit video game.

Seemingly confused and exasperated, Cruz can be seen in the video below tossing his hands up in the air as if questioning what just happened to him. He then turns to exit the stage and, in a seeming face-saving maneuver, turns to wave goodbye to the audience.

For those unfamiliar with the Faith and Freedom Coalition, the group was founded in 2009 by longtime religious-right strategist and Christian Coalition founder Ralph Reed, Jr., as a means to bring together evangelicals and Tea Party voters under the same tent.

The organization posted the following – extremely brief – explanation on their website, describing the incident as an “audio-visual mistake.”

Senator Cruz had not completed his remarks when a member of the audio-visual team mistakenly announced the next speaker. We sincerely apologize to Senator Cruz who is a great friend of this organization and people of faith across the country.

You can watch it all happening in the clip below:

Sen. @TedCruz is cut off in the middle of his remarks at the @FaithandFreedom Coalition Conference. Full video here: https://t.co/567TOaf01u pic.twitter.com/J0BK9J9nhe