Watch The Former President Of Mexico Hand Trump His A** 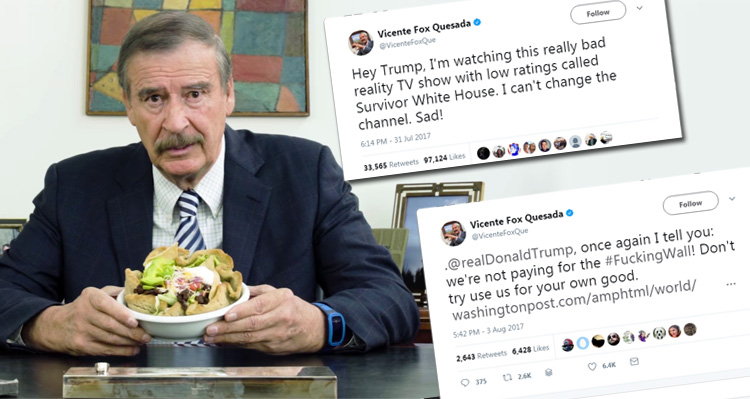 Vicente Fox is not a fan of Trump and has taken to mocking the bigoted billionaire in an ongoing series of tweets and YouTube videos.

In the wake of all the White House shake-ups last week, Vicente Fox, the president of Mexico from 2000 to 2006, took to Twitter to mock Trump.

He has also been taunting Trump for a long time now regarding his efforts to build a wall separating the United States and Mexico.

This Thursday (August 3, 2017) Fox tweeted: “@realDonaldTrump once again I tell you: we’re not paying for the #FuckingWall! Don’t try use us for your own good.”

.@realDonaldTrump, once again I tell you: we're not paying for the #FuckingWall! Don't try use us for your own good. https://t.co/nUeDipDVsI

This tweet mirrors a YouTube video he published the first week of June going into elaborate detail about Trump’s beloved wall. Using a crude drawing of a wall and a ladder, Fox explains in one part of the video how a $25 ladder can beat a $25 million dollar wall.

In his latest video, Fox once again hands Trump his a**, offering some sage and hilarious advise.

“I know you don’t want to end the world, but you are a hot-tempered man, Donald, and when it comes to war, it is important to slow down,” he states, adding that “I made a list of five questions that I want you to ask yourself before you push the button.”