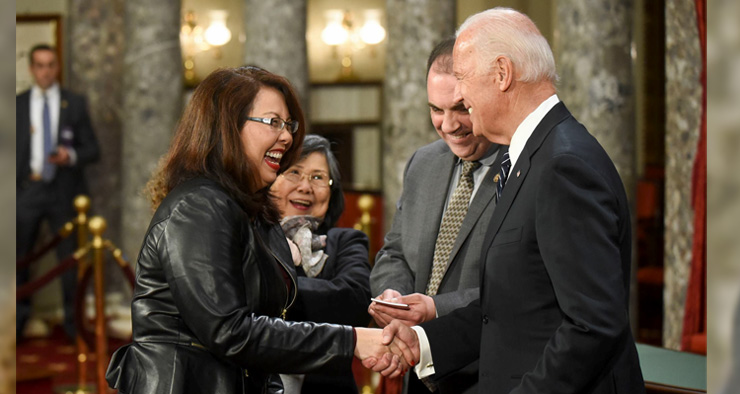 Democratic Senator Tammy Duckworth of Illinois is speaking out about efforts by the White House to move forward with a proposed ban on transgender troops serving in the military.

Following reports that the White House is sending guidance to the Pentagon directing the Department of Defense to implement President Trump’s new discriminatory ban on transgender troops serving in the U.S. military, Duckworth released the following statement:

When I was bleeding to death in my Black Hawk helicopter after I was shot down, I didn’t care if the American troops risking their lives to help save me were gay, straight, transgender, black, white or brown. All that mattered was they didn’t leave me behind. If you are willing to risk your life for our country and you can do the job, you should be able to serve—no matter your gender identity or sexual orientation. Anything else is not just discriminatory, it is disruptive to our military and it is counterproductive to our national security. If the President enacts this ban, which would harm our military readiness, the Democratic and Republican Members of Congress who oppose this discrimination must enact legislation that prevents it from taking effect.

The Hill reports that Duckworth has “previously called the ban ‘sickening’ given reports that Trump had dodged the draft during the Vietnam War.”

The proposed ban, which Trump announced on Twitter in July, came to the surprise of both lawmakers and military officials, several of whom publicly criticized the proposal. The White House has reportedly made preparations to coach the Pentagon on the policy’s implementation, which has drawn bipartisan backlash.

An Iraq War veteran, Duckworth received the Purple Heart after her Black Hawk helicopter was shot down in Iraq in 2004 and she lost both legs and had her right arm damaged.

“The first female double amputee from Iraq,” she received a waiver and served as a Lieutenant Colonel in the Illinois Army National Guard until her retirement in 2014.