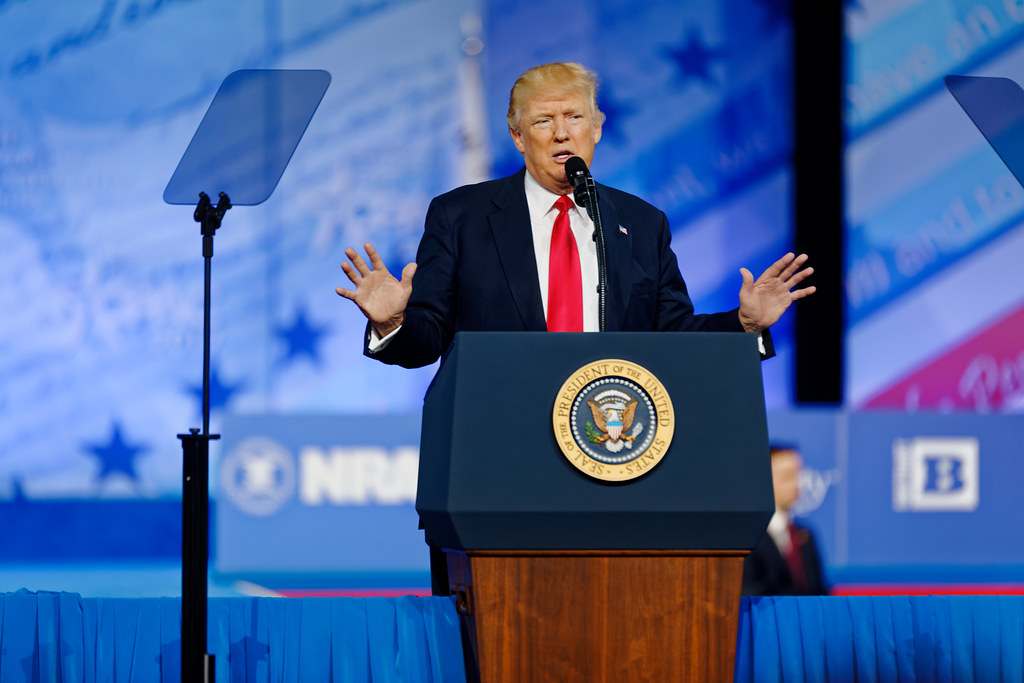 The Guardian published a series of terrifying ‘doom and gloom’ articles in the wake of Trump’s horrific United Nations speech.

British daily newspaper The Guardian published a series of three articles discussing Trump’s now infamous United Nations speech.Each article offers a different approach to the subject – the first one providing a general overview of the speech; the second offers insight into reaction by the General Assembly to the speech; and the third is an annotated point-by-point guide to Trump’s address.

Overview of Trump’s Maiden Address before the UN General Assembly

The first article, titled “A blunt, fearful rant: Trump’s UN speech left presidential norms in the dust,” began by noting that “his maiden address to the UN General Assembly was unlike any delivered by a US president.”

“There are precedents for such fulminations, but not from US leaders. In tone, the speech was more reminiscent of Nikita Khrushchev, Fidel Castro or Hugo Chávez,” The Guardian added.

The speech struck some of the darker notes of Trump’s earlier rhetoric, like the “American carnage” he described at his inauguration in January, and his evocation of an embattled western civilisation in his speech in Poland in July.

All three used fear as their major key…

Like Bush, Trump offered the world a black-and-white choice between the “righteous many” against the “wicked few” – but his choice of language was far blunter than his predecessor. There can not have been many, if any, threats to “totally destroy” another nation at a UN general assembly. He did not even direct the threat at the regime, making it clear it was North Korea as a country that was at peril.

The Guardian concluded that article with the following haunting analysis:

With Tuesday’s address… Trump punched yawning holes in his own would-be doctrine [labelled “principled realism”], singling out enemies, expressing horror at their treatment of their people and threatening interference to the point of annihilation.

What was left, when the muted applause died down in the UN chamber, was a sense of incoherence and a capricious menace hanging in the air.

Reaction by the UN General Assembly To Trump’s Speech

The next article published by The Guardian was titled: “Donald Trump threatens to ‘totally destroy’ North Korea in UN speech” and dwelt more on the reaction of the General Assembly to Trump’s speech.

“The speech was greeted in the UN chamber mostly with silence and occasional outbreaks of disapproving murmurs, as Trump castigated a succession of hostile regimes. When Trump spoke of North Korea, “alarmed murmurs spread around the hall” wrote The Guardian.

Turning his attention to the Iran nuclear deal, Trump told the General Assembly that: “Frankly, that deal is an embarrassment to the United States. I don’t think you’ve heard the last of it – believe me.”

The Guardian offered the following analysis of that portion of the speech:

Like much of the 41-minute speech, Trump’s reference to the Iran deal was met by stony silence. The deal is overwhelmingly supported by UN member states, including most of Washington’s closest allies.

The French president, Emmanuel Macron… warned that if the existing deal was abandoned it would lead only to a “no man’s land”, a nuclear arms race and a situation as serious as the North Korean crisis.

The Iranian foreign minister, Mohammad Javad Zarif, responded with a tweet, saying Trump’s “ignorant hate speech belongs in medieval times – not the 21st Century UN” and adding that it was “unworthy of a reply”. “Fake empathy for Iranians fools no one,” he said.

Trump also spoke of Venezuela, and vowed to help the Venezuelan people “regain their freedom, recover their country and restore their democracy.”

Reaction from Venezuela was swift as The Guardian reported:

The Venezuelan foreign minister, Jorge Arreaza, said Trump’s remarks were “sad for the world” and said the US president had spoken like a general at the head of an invading army.

“We do not accept threats from President Trump or whoever in the world,” Arreaza said. “We are … peaceful people and we want relations of mutual respect.”

Maduro, who did not attend the UN gathering, reacted angrily from Caracas, calling the US president’s speech an “aggression from the new Hitler of international politics, Mr Donald Trump, against the people of Venezuela.”

The Guardian‘s third article was in the form of a point-by-point annotated guide to Trump’s UN address.

The guide began by discussing the fact that Trump’s speech was clearly a collaboration drafted by different factions within the administration.

“Trump’s maiden UN address is disjointed, and apparently written by committee, bearing the fingerprints of both the isolationist advisers such as Stephen Miller and realists such as HR McMaster. It is both conventional and Breitbartian,” the guide began.

Continuing, The Guardian wrote that:

[Trump went] on to translate his approach to business in New York to a vision for the world: self-interest rather than altruism, competition rather than cooperation, Hobbes rather than Rousseau. The emphasis is on “Nations” rather than “United”. Despite the departure of hardline nationalist Steve Bannon from the White House, the “America first” vision in Trump’s dystopian inaugural address is intact.

The Guardian later discussed a portion of the speech in which Trump threatened to destroy the country of North Korea and mocked its president, calling him “Rocket Man.”

“The United States has great strength and patience, but if it is forced to defend itself or its allies, we will have no choice but to totally destroy North Korea. Rocket Man is on a suicide mission for himself and for his regime,” Trump told the General Assembly.”

Josh Earnest, the former White House press secretary, told the MSNBC channel: “To be blunt, I think it is foolish to try to goad or provoke or mock someone who in President Trump’s own words is on a suicide mission.”