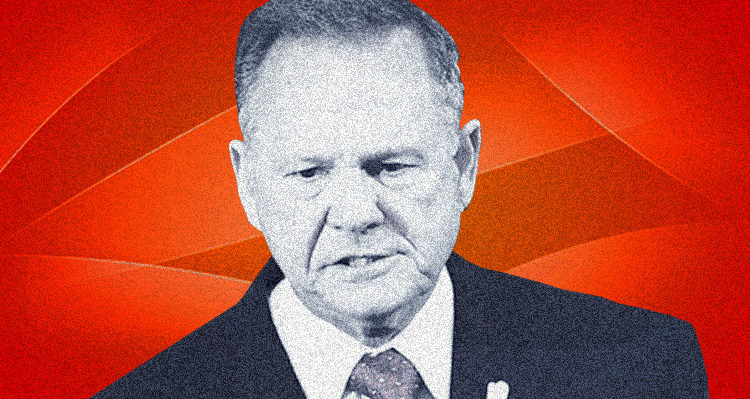 It seems that Roy Moore was fooled by a former white nationalist leader falsely claiming to have a super PAC that helped power Trump’s 2016 victory.

His campaign in disarray, it seems that Roy Moore has added a whole new problem to his already tarnished reputation when his campaign announced his endorsement by “Pro-Trump Super PAC Indiana First.”

The Judge Moore U.S. Senate website issued a press release on Tuesday announcing the endorsement and describing the PAC as having “contributed to the election of President Trump and Vice President Pence.”

Moore welcomed the PAC’s endorsement. “IndianaFirst is committed to the success of President Trump’s America First agenda,” Moore is quoted as saying on his website, adding: “and I am honored to receive their endorsement. Republicans from across America are recognizing the incredible significance of this race for the future of conservatism and continue to unite in force around our campaign.”

However, there is just one problem. As NBC News reported:

[T]he organization now backing the controversial candidate ahead of the Dec. 12 special election was founded just weeks ago by a 24-year-old aspiring political operative who acknowledged to NBC News Tuesday that he’s trying to disassociate himself from white nationalist organizations he appeared to have affiliated with in the past.

The situation speaks to the degree to which Moore’s campaign is understaffed and underfunded, seemingly unable to perform a basic check of a previously unknown political entity, IndianaFirst, or its leader, Caleb Shumaker, who has had ties to a fringe party considered a hate group by leading civil rights organizations.

The IndianaFirst PAC appears to have been formed during the week of Nov. 9, the same date their website was registered. According to Federal Election Commission requirements, it would need to register within 10 days of raising or spending more than $1,000 and file a separate statement to clarify that they’re an independent expenditure-only group. No such filings existed as of Tuesday afternoon.

According to the Anti-Defamation League, Caleb C. Shumaker briefly served as chairman of the National Youth Front, an offshoot of the American Freedom Party, a white nationalist group. A YouTube video posted to the account of a Caleb Shumaker laments “a nation ethnically fractured by a failed utopian social experiment of massive immigration and multiculturalism,” and ends with the declaration that “America is ours.”

NBC News reached out to Shumaker at his home in Indiana, and reported that:

Shumaker alternately disavowed the white nationalist views and denied he had ever expressed them himself. He acknowledged joining the National Youth Front, saying he was “pro-American,” but said he left the group when the American Freedom Party “got involved.”

“I left due to the direction they were going with their ethnocentric views,” he said.

Shumaker was briefly mentioned as the former chair of the National Youth Front (NYF) in a 2015 article published by the Southern Poverty Law Center.

Titled “MEET THE NATIONAL YOUTH FRONT: THE NEW RACISTS ON CAMPUS,” the article described the group as “the newly formed youth wing of the white nationalist American Freedom Party, and it is only the latest in a growing number of racist organizations targeting youth on college campuses.”

From the styling of its fliers to the sleek recruitment videos on its website, NYF seems to be modeling itself after other successful white nationalist youth movements, such as Generation Identitaire, the youth wing of France’s far-right, nationalist movement Bloc Identitaire, known for its large street demonstrations targeting the Muslim community in France. According to its former chairman, Caleb Shumaker, NYF is “march[ing] to take back our streets not by words but with action.”

“Our goal is to take power from those who have weaponized our institutions against us. To put an end to the invasions of our nations. To stop the ongoing defamation of our people. … To eliminate the endless ideological subversion of our nations most precious gift. Its youth,” read NYF’s stated goals.