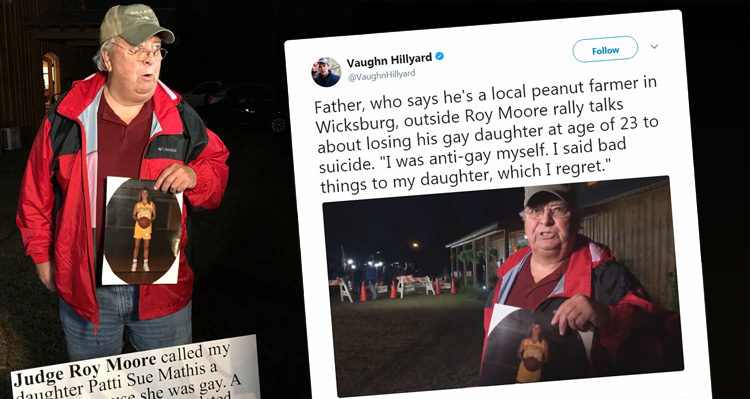 A grieving father who lost his gay daughter to suicide provides a grim reminder of the cost of Roy Moore’s world view.

The country has been caught up in the controversy surrounding Republican Roy Moore’s bid for a seat in the U.S. Senate – and today is the day America finds out the outcome of that close election.

The exact toll of Roy Moore’s Senate candidacy remains unclear—both for the state and the nation. The allegations of sexual misconduct by Moore have, rightly, become the inescapable axis of the Alabama special election that will be held on Tuesday. The women who have come forward about their experiences with Moore decades ago, when most of them were just teenagers, have already carried a heavy burden. The swirling accusations have subsumed all other campaign issues; they have also engulfed the other extreme costs exacted by Roy Moore and his bigoted worldview. On Monday evening, during Moore’s final campaign stop before voters go to the polls, we got a reminder of the consequences of Moore’s beliefs, and the steep price others pay, in the form of Alabama peanut farmer Nathan Mathis.

The video begins with Mathis speaking to reporters and holding up a photo of his daughter, Patti Sue Mathis, wearing a basketball uniform.

Asked by a reporter if he was suggesting that his daughter committed suicide due to Roy Moore’s remarks, Mathis said “no,” adding:

I was anti-gay myself. I said bad things to my daughter myself, which I regret. But I can’t take back what happened to my daughter. But stuff like saying my daughter’s a pervert, sure that bothered her. Now Judge Moore not just said my daughter, he didn’t call my daughter by name. He said all gay people are perverts, abominations. That’s not true. We don’t need a person like that representing us in Washington.

Mathis also explained that “my sign speaks for itself and it’s the truth.”

Nathan Mathis is here outside the Moore event. He tells me his daughter committed suicide and says Roy Moore called her a pervert because she was gay. “My sign says it all,” he said. pic.twitter.com/5qZnM0IyNJ

Discussing the significance of Mathis’ protest and the video, The Washington Post reported:

Perhaps it was the man’s strong but plain-spoken rebuke outside a Roy Moore rally on the campaign’s final night, condemning the candidate’s past comments lambasting homosexuality.

Perhaps it was the admission of the man, a peanut farmer, that he too, had harbored some of the same anti-gay feelings.

Perhaps it was his sign, a photograph of his daughter, a lesbian who, he said, had killed herself when she was 23.

Whatever it was, the two-minute video of Nathan Mathis, 74, who spoke outside the Republican candidate’s rally, struck a nerve, traveling far and wide as a sort of emotional coda to a wrenching U.S. Senate race in Alabama that has captivated the country. Alabama voters will go to the polls on Tuesday to choose between Doug Jones, a moderate Democrat who came to prominence helping to prosecute Ku Klux Klan members as a U.S. attorney in the 1990s, and Roy Moore, a far-right conservative and former judge whose candidacy has sharply divided the party he represents and the electorate beyond.

You can watch Mathis talking to reporters, below. So far the tweet has received over 2 million views, over 30 thousand retweets and thousands of comments.

Father, who says he's a local peanut farmer in Wicksburg, outside Roy Moore rally talks about losing his gay daughter at age of 23 to suicide. "I was anti-gay myself. I said bad things to my daughter, which I regret." pic.twitter.com/J0oOU0EJI2