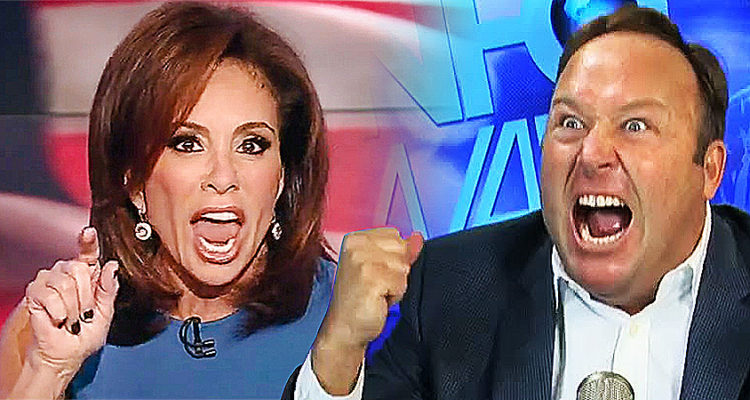 While Trump critics fear he will become a dictator, many right-wing pundits are calling for him to do exactly that.

Salon published an enlightening – if not frightening – article at the end of January 2018 detailing the recent call by right-wing media pundits for behavior akin to that of a police state.

Salon began, noting that: “Some of Trump’s critics feared he might become a dictator. On the radical right, his fans are now hoping he will.”

After discussing, in broad terms, the relationship between Trump and his admirers – particularly those in the right-wing media, Salon reported that:

Given how the president and his close admirers tend to bring out the worst in each other, it’s particularly concerning how the most vehemently pro-Trump media outlets are going far beyond the sycophantic blather of “Fox & Friends” to outright calls for the president to jail or even execute people he doesn’t like — particularly if they happen to be investigating connections between Trump’s 2016 campaign and Russia.

Salon went on to discuss several examples, such as the one set by Fox News host Jeanine Pirro.

In December, Fox News pundit and Trump ally Jeanine Pirro called on the president to implement a massive purge of officials who are not totally loyal.

“There is a cleansing needed in our FBI and Department of Justice — it needs to be cleansed of individuals who should not just be fired, but who need to be taken out in cuffs!” Pirro ranted.

Pirro, a decades long friend of Trump, has also called for arresting individuals who work for the FBI and the Justice Department who do not support Trump, calling for a “cleansing” those government agencies of people critical to the president.

Ms. Pirro has lately emerged as a force in a right-wing media effort to undermine the special counsel, Robert S. Mueller III, who is leading the investigation into Russian meddling in the 2016 presidential election. Like other pro-Trump commentators, Ms. Pirro has called for Mr. Mueller to be fired. But she has gone further, saying on the air that “individuals” in the F.B.I. and the Justice Department “need to be taken out in cuffs.”

In a fiery monologue on Dec. 16, she told her viewers: “There is a core group of arrogant, corrupt and lawless individuals that felt that they, and not we, should decide a presidential election. And when they failed, they conspired to create the false narrative to not just muddy our choice for president but to bring down his presidency and his family as well.”

A British-born Hungarian-American military and intelligence analyst, Gorka served as deputy assistant to Trump in 2017 until his resignation on 25 August 2017 amid rumors that he was a Nazi sympathizer.

Fox News viewers have also been introduced to the idea of capital punishment for Trump’s critics. In October, Sebastian Gorka, the former White House adviser who is now a “national security strategist” at Fox News, invoked a conspiracy theory about former secretary of state Hillary Clinton’s supposed approval of a deal for a Canadian uranium company that was working with a Russian firm.

According to Gorka, American officials who approved the sale are the equivalent of Julius and Ethel Rosenberg, the American couple executed for selling nuclear secrets to the Soviet Union.

“If this had happened in the 1950s, there would be people up on treason charges right now. The Rosenbergs, OK?” Gorka told a rapturous Sean Hannity. “This is equivalent to what the Rosenbergs did, and those people got the chair. Think about it. Giving away nuclear capability to our enemies, that’s what we’re talking about.”

Most recently, during a Sunday appearance on “Justice with Judge Jeanine” [Pirro] Gorka suggested that there was a full deep state conspiracy to deny Trump official security clearances spearheaded by the CIA.

“There may be a deliberate minefield put in place where they know somebody like this has skeletons in their closet, and they slow roll everything to just make things like this explode a few months later. The president has to assert control over this system.”

The clearance system is a tool used by the Deep State to block people who want to drain the swamp. @realDonaldTrump and @WhiteHouse need to assert control and FIX it. https://t.co/9YaAsJP3So

Writing that “Alex Jones is almost certainly the most prolific conspiracy theorist in contemporary America,” the Southern Poverty Law Center provided the following brief background on the right-wing radio host:

In terms of the audience he reaches, he also may be the one with the most far-reaching influence in the nation’s history. Time after time, he warns without any evidence that terrorist attacks — from 9/11 to the Boston Marathon bombings to the 2013 Washington Navy Yard mass murder — are actually “false flag” operations by our government or evil “globalist” forces planning to take over the world. To many, Jones is a bad joke. But the sad reality is that he has millions of followers who listen to his radio show, watch his “documentaries” and read his websites, and some of them, like Boston Marathon bomber Tamerlan Tsarnaev, resort to deadly violence.

Salon reported that: “As the Russia investigation has continued to heat up, Alex Jones — the conspiracy radio host who shifted from commentary about gay frogs, Ron Paul and space aliens to spittle-flecked pro-Trump bombast — has begun increasing his own rhetorical vehemence against law enforcement officials.”

As the Mueller investigation has gotten two guilty pleas and numerous indictments against former Trump associates, Jones’ violent outbursts have only increased. He has apparently absorbed every unhinged conspiracy theory about treasonous “Deep State” elites and the ways they are using their supposedly limitless power to overthrow the president.

During the Jan. 19 episode of his program, Jones went on an extended-length rant, saying that Clinton, former president Barack Obama, former FBI director James Comey and a host of others were accusing Trump of acting like a dictator. Jones’ suggested remedy: Trump should start doing just that.

“Mr. President, they’re not going to stop, they’ve already started a civil war! They’ve all got to go to prison!”

Jones went on to accuse Phil Mudd, a former FBI and CIA official and now a commentator at CNN, of plotting to kill Trump over his antagonistic remarks about career intelligence officers.

Going into full-on conspiracy theory mode, Jones shouted: “Phil Mudd is on TV saying he’s going to kill you! All you need to do is go after them now! Turn the dogs loose! They started it! They did it! They’re the foreign power! They’re the enemy! They’re the traitors!”

In a December article on Jeanine Piro, The New York Times reported that:

She is not the only media figure attacking the inquiry and the law enforcement officials in charge of it. Other Fox News commentators, like Sean Hannity, have labeled Mr. Mueller and his team hopelessly biased. On Jesse Watters’s Fox News show last weekend, an onscreen graphic asked, “A Coup in America?” The Wall Street Journal — like Fox News, a media property owned by Rupert Murdoch — called for Mr. Mueller to be fired on its editorial page.

“This is the stuff you would expect in authoritarian states, in Russia or North Korea,” said David Axelrod, President Barack Obama’s chief political strategist. “It’s an obvious effort to lay the groundwork for ending or discrediting the probe, even at the cost of further eroding trust in our institutions.”