February 4, 2018 by Samuel Warde No Comments 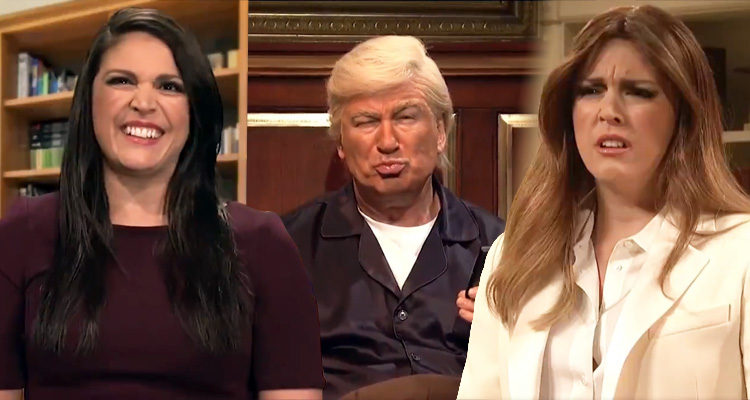 Alec Baldwin returned to Saturday Night Live this weekend, reprising his role as Trump for the show’s cold open.

The sketch began with Trump calling Fox & Friends from his bed. Thanked for taking the time out of his busy schedule to call the show, Trump responded that if he sounded out of breath it was because he was doing his P90X exercises – as he reached for a McDonald’s Egg McMuffin.

“From you guys,” Trump replied.

“I’m told we’re getting a special call… who’s on the line?” #SNL pic.twitter.com/gCpXO9WlL6

Hicks replied: “Sure, if you say so. There are no real jobs here, you know? Every day feels like when a group of strangers work together to push a beached whale back into the sea.”

Cecily Strong did double-duty for the show, returning later on to spoof a stressed out First Lady Melania Trump. Natalie Portman, the show’s guest host, appeared as former First Lady Jackie Kennedy as Melania was preparing to attend Trump’s State of the Union Address.

The sketch began with Melania sitting in front of a mirror, lamenting her role as First Lady. “Come on, Melania, practice your happy face,” Strong’s pouting Melania told herself, adding: “Oh, I don’t belong as first lady. I wish I could talk to someone who’s been through this whole mess before.”

Portman appeared in a puff of smoke telling her: “”Hello, Melania, it is me, Jackie Kennedy. I have come to you in your hour of need, because I know how trying being first lady can be. All first ladies have a platform. Yours is bullying, mine was little hats.”

Melania responded: “No First Lady has ever been more humiliated than me…”

Hillary Clinton, played by Kate McKinnon appeared next telling the current First Lady: “Melania, I feel your pain, but you married him. And, like America, you had a choice, so don’t choose to eat 7-11 sushi and then come to me saying, ‘Something’s wrong!'”

Michelle Obama – played by Leslie Jones – appeared, and said, “Look, Barack and I have a perfect relationship. It’s like The Notebook, but black and rich.”

Clinton remarked that Michelle’s remarks weren’t helpful, and Jones’ Obama responded, “Whatever, my arms rule, I love vegetables and I can be president whenever I want,” mocking Clinton’s loss to Trump in the 2016 election.

"No First Lady has ever been more humiliated than me…" #SNL pic.twitter.com/OKreEN3HLA