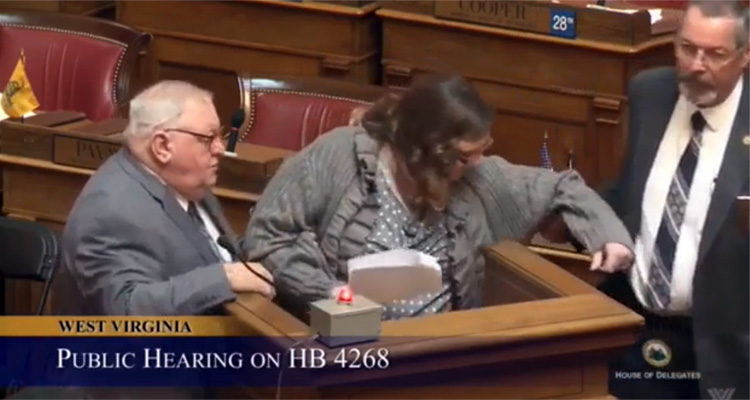 A woman was dragged from the floor of the West Virginia House after she began reading a list of their names and how much money they have received in donations from oil and gas companies.

Common Dreams reported over the weekend that lawmakers in West Virginia dragged House of Delegates candidate Lissa Lucas from the house floor as she read off a list of donations received by House members from the oil and gas industries.

The incident occurred during an open hearing last Friday and was captured on video (at the bottom of the article).

As Common Dreams reported: “Lucas traveled the 100 miles from her home in Cairo, West Virginia to the state capitol in Charleston Friday to testify against an oil and gas industry sponsored bill (HB 4268) that would allow companies to drill on minority mineral owners’ land without their consent.”

Lucas took to the podium and began by pointing out that “the people who are going to be speaking in favor of this bill are all going to be paid by the industry.”

“And the people who are going to be voting on this bill are often also paid by the industry,” Lucas said.

“I have to keep this short, because the public only gets a minute and 45 seconds while lobbyists can throw a gala at the Marriott with whiskey and wine and talk for hours to the delegates,” Lucas said.

Lucas, whose home country has been overrun by the fracking industry, responded to her eviction from the House floor on her official campaign website, writing:

As I tried to give my remarks at the public hearing this morning on HB4268, in defense of our constitutional property rights, I got dragged out of House chambers.

Why? Because I was listing out who has been donating to Delegates on the Judiciary Committee.

This is, of course, public information.

Allow me to point out that if Delegates genuinely think that my talking about who their campaign donors are—and how much they’re receiving from corporate lobbyists/corporate PACs—is an ad hominem attack… then they should be refusing those donations.

Yeah, refuse any donation that, if someone mentions it, makes you feel personally attacked.

Because that’s not an attack. That’s guilt. And you SHOULD be feeling that. Let that guilt about who you’re really working for inform your votes; don’t let the corporate money do it.

Lucas also posted her prepared statement for the House – that was cut short when she was literally dragged from the House floor. She began telling delegates:

I’m Lissa Lucas from beautiful Ritchie County, WV, right in the front lines of the Marcellus. I’m a mineral owner. And I’m here to tell you that ALL of us, no matter our party, want our property rights protected. The attack on property rights is an assault on rural people, and it goes against both party platforms.

While lobbyists have the money to buy your time at fancy gatherings like the Wine and Whisky gala at the Marriott on Wednesday—members of the public have been allotted just about 2 minutes each to make the case for our rights, so I’ll just have time to talk about four delegates.

At that point, she began reading off her list of donation to four members of the West Virginia House of Delegates before her mike was cut off and she was eventually evicted.

Had she been allowed to continue, Lucas’ intended closing remarks are as follows:

Delegates you cannot, without the appearance of impropriety—and likely without actual impropriety—vote for this bill.

For those watching online or in the gallery, if your delegate votes to give away your rights to their corporate donors, you should get behind a candidate who’ll work for YOU, rather than someone who is getting paid to hand over your property rights to corporations. Save for Del Harshbarger, there are Republicans challenging them in the primary, and a Democrat who will challenge the winner, so in most cases there’s someone no matter your political persuasion.

Full disclosure: There is a Democratic challenger for Harshbarger—that would be me. But I’m here to talk about the sale of our constitutional rights, not to campaign. So let’s move on to Delegate Armstead.

Armstead is not a member of this committee, but he’s the guy who makes committee assignments for his party. His donors include the usual suspects—AEP, EQT, Dominion, FirstEnergy, etc. He got nearly $20K ($19,550) from energy donors, about 21% of his total. He seated on this committee everyone I’ve just talked about, and people I haven’t been allotted the time to talk about. Yeah, he’s working for those same donors, too.
Delegates, voting to help the corporations that bought you is moral turpitude. And if y’all vote to enable Big Government to tell tax paying citizens what we can do with our own durn property, you can bet there will be people like me coming out of the woodwork to challenge you… and to make sure you either represent the people, or you get the hell out.