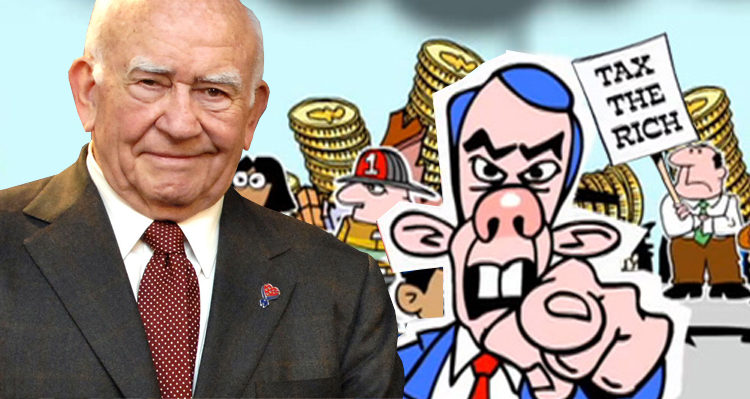 Controversy rages as billionaires storm over the White House, making this the perfect time to review this video starring Ed Asner.

Now is a good time to look back on an animated classic, “Tax the Rich,” that was narrated by Hollywood Legend Ed Asner, considering the string of wealthy millionaires and billionaires serving in Trump’s cabinet and in other key positions in his administration.

As Vanity Fair reported, Trump has filled his cabinet “to an unprecedented degree, with billionaires and businessmen” to include:

“Betsy Devos, the billionaire heiress Trump chose for education secretary, was criticized during her confirmation hearing by Senate Democrats for failing to properly disclose her vast financial holdings in government ethics paperwork.”

“Steven Mnuchin, whom Trump nominated to lead the Treasury Department, was grilled over the tens of thousands of foreclosures he oversaw as the head of lender OneWest, as well as for forgetting to disclose nearly $100 million in personal assets.”

“Secretary of State Rex Tillerson, the former C.E.O. of Exxon Mobil, disclosed more than $400 million in assets in federal ethics filings, with investments around the world.”

And briefly by “Anthony Scaramucci, a well-known Wall Street booster who had been expected to serve in the White House as a liaison to the business community, and who was told that he would no longer be getting the job… because of potential ethical conflicts.”

The video, below, was created by the California Federation of Teachers and pondered “how we arrived at this moment of poorly funded public services and widening economic inequality.”

As the documentation accompanying the video, posted on YouTube, states: “Things go downhill in a happy and prosperous land after the rich decide they don’t want to pay taxes anymore. They tell the people that there is no alternative, but the people aren’t so sure. This land bears a startling resemblance to our land.”

Check it out and let us know your thoughts in the comments, below.