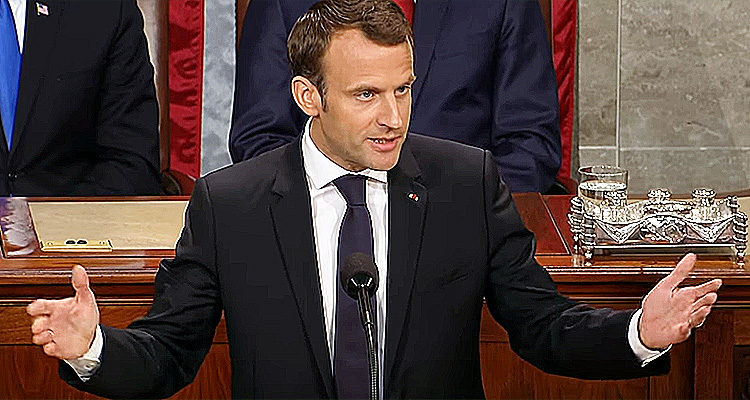 Emmanuel Macron offered a forceful rejection of Trumpism, excoriating “extreme nationalism” and protectionism. “You can play with anger and fear for a time,” Macron said, alluding to the themes that fuel right-wing nationalist movements in the West, “but they do not construct anything.”

Emmanuel Macron repudiates Trump’s political philosophy and worldview after spending the first part of the week kissing, hugging, and holding hands with him.

“Some bromance” – CNN reported on Thursday that “France’s President Emmanuel Macron and Donald Trump skipped through Tuesday kissing, hugging, holding hands and rubbing each others’ shoulders.”

On Wednesday, before a joint session of of Congress, the charismatic French leader turned around and repudiated the US President’s political philosophy and worldview.

The startling contrast between Macron palling around with Trump on a state visit and his velvet hammer speech — effectively defending the world order from “America First” nationalism — encapsulated his intricate US strategy.

Macron wants to bind the Trump administration into the existing Western international system, to convince it to dive back into multilateral efforts to shut down Iran’s nuclear program, to battle climate change and to safeguard globalization and free trade.

Striking a similar tone, The Washington Post reported that “after hugging Trump, Macron tears down Trumpism.”

Before French President Emmanuel Macron delivered an address at a joint meeting of Congress on Wednesday, the headlines about his trip to Washington centered on his apparent “bromance” with President Trump. On Tuesday, the duo engaged in a series of physical embraces and celebrated both their personal rapport as well as the “unbreakable” bonds between France and the United States.

In his speech to American lawmakers, he offered a comprehensive rejection of the main tenets of Trumpism, excoriating “extreme nationalism” and protectionism, championing climate-change science and defending the international liberal order. “You can play with anger and fear for a time,” Macron said, alluding to the themes that fuel right-wing nationalist movements in the West, “but they do not construct anything.”

Macron went on, urging his American audience to look beyond borders and walls. “We can choose isolationism. But closing the door to the world will not stop the evolution of the world,” he said. And he bristled at the rise of autocrats and illiberal democrats, which include some leaders favored by Trump: “I don’t share fascination for new strong powers and the illusion of nationalism,” he said.

The Guardian elaborated on the speech writing:

Over the course of a 50-minute address to a joint meeting of Congress on Wednesday, the French president said he was “sure” the US would one day return to the Paris climate change accord, and vowed that France would not abandon the 2015 nuclear deal with Iran, known as the Joint Comprehensive Programme of Action (JCPOA)

More broadly, Macron presented himself to the US legislature as an unabashed advocate of the liberal world order of global institutions and free trade – the very opposite of the America First nationalism that fuelled Trump’s rise to the White House. The speech – delivered in English – was interrupted by frequent standing ovations, many from both sides of the aisle.

CNN reported that: “Macron also summoned legacies largely ignored by Trump. He used his moment in Congress to celebrate the work of James Baldwin, Richard Wright and other icons of the civil rights struggle in America. Not long thereafter, he toured the Martin Luther King Jr. memorial in Washington with Rep. John Lewis (D-Ga.), a civil rights hero who branded Trump a “racist” earlier this year.

“Human rights, the rights of minorities and shared liberty are the true answers to the disorder of the world,” Macron said to Congress.

In a separate article, The Washington Post provided transcripts to portions of the speech, noting that there were several incidents where Macron sounded Barack Obama.

For example, here are the two men discussing nationalism and isolationism:

“No matter how imperfect our efforts, no matter how expedient ignoring such values may seem, that’s part of defending America. For the fight against extremism and intolerance and sectarianism and chauvinism are of a piece with the fight against authoritarianism and nationalist aggression. If the scope of freedom and respect for the rule of law shrinks around the world, the likelihood of war within and between nations increases, and our own freedoms will eventually be threatened.”

“We can choose isolationism, withdrawal, and nationalism. This is an option. It can be tempting to us as a temporary remedy to our fears. But closing the door to the world will not stop the evolution of the world. It will not douse, but inflame, the fears of our citizens. We have to keep our eyes wide open to the new risks, right in front of us.”

“If we don’t act boldly, the bill that could come due will be mass migrations, and cities submerged and nations displaced, and food supplies decimated, and conflicts born of despair. The Paris Agreement gives us a framework to act, but only if we scale up our ambition. And there must be a sense of urgency about bringing the agreement into force, and helping poorer countries leapfrog destructive forms of energy.”

“Some people think that securing current industries — and their jobs — is more urgent than transforming our economies to meet the global challenge of climate change. I hear these concerns, but we must find a smooth transition to a low-carbon economy. … By polluting the oceans, not mitigating CO2 emissions and destroying our biodiversity, we are killing our planet. Let us face it: there is no Planet B.”