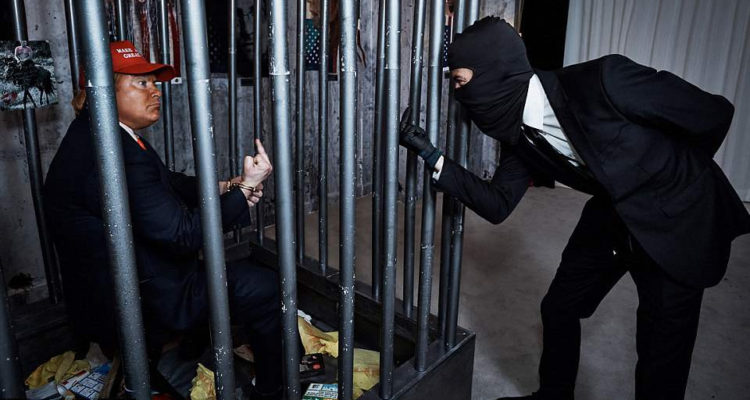 On Friday (30 March), the anonymous collective Indecline staged their most daring art stunt yet, building a prison cell for US president Donald Trump inside a suite of the Trump International Hotel and Tower in New York. The cell held a handcuffed Trump impersonator and several live rats, and was littered with McDonald’s food wrappers, a paperback copy of the 1987 book Trump: The Art of the Deal and a photo of a shirtless Vladimir Putin on horseback, covered with a love note and lipstick kiss. The group, who were behind the series of naked Trump statues that appeared in five US cities in 2016 and a mock cemetery that popped up on the grounds of the Trump National Golf Club in Bedminster, New Jersey earlier this year, say the work was inspired by “Trump’s likely fate”.

The Art Newspaper went on to report that the Trump impersonator did “a passable impression” of Trump and “spouted one-liners in Twitter-like bursts:”

The New York Daily News talked to a spokesperson for Indecline who asked to remain anonymous.

Referring to Trump, the spokesperson stated: “We feel like he really is the embodiment of a rat in every way, shape or form,” adding that: “He’s the lowest of the low and we felt to imprison him with his own breed is only right.

Speaking about the exhibit itself, the spokesperson stated that: “We painted a picture that’s maybe part wishful thinking, part foreshadowing. We do feel like the noose is tightening.”

The Daily News also reported that this was not the first time that Indecline had “targeted” Trump. “The group unveiled an unflattering statue of a nude Donald Trump in Union Square last August,” and “In January, they set up a ‘Trump Cemetery’ at his New Jersey golf club.”

This clip does not do this insane project justice.

On March 29th, #INDECLINE checked into a suite at the Trump International Hotel in New York City. Over the course of 24 hours, the collective clandestinely erected an unauthorized, large-scale art installation entitled, “The People’s Prison”. In addition to the installation, 13 American artists were chosen to paint portraits on American Flags, each one representing a different iconic freedom fighter or activist. Select media outlets were invited to attend and report on the private unveiling.

This project celebrates America’s long and vibrant history of political activism, poetic dissidence and radical thinking and serves as a call to all artists to engage in direct action against President Trump, his administration and their fanatical followers. “The People’s Prison” will be recreated in its entirely at @gallery30south in Pasadena in April. Please stay tuned for information on opening night. All flags will be on sale with proceeds going to charities chosen by each artist.

Special Thanks to the amazing hotel staff at @trumpnyc. We couldn’t have done this without you. Power to the People.

For those unfamiliar with Indecline, their website offers the following brief explanation of their collective:

INDECLINE is an Activist Art Collective founded in 2001. It is comprised of graffiti writers, filmmakers, photographers and full-time rebels and activists. INDECLINE focuses on social, ecological and economical injustices carried out by American and International governments, corporations and law enforcement agencies.