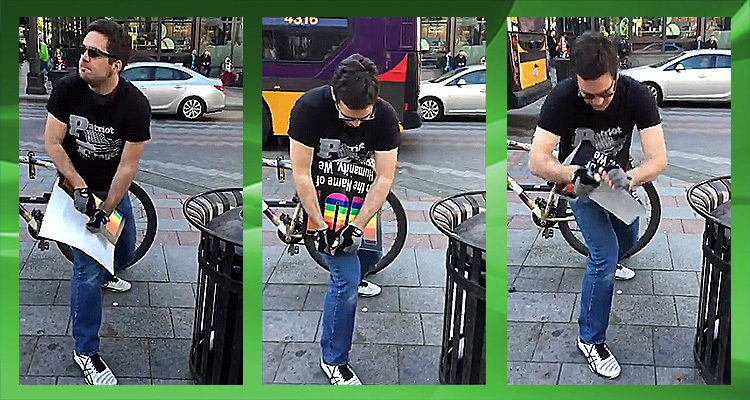 OMG. This has to be one of the best examples of real-life trolling ever as a white supremacist bully is mercilessly mocked for being too weak to rip up an anti-fascism sign so he can toss it in the garbage can.

Film producer and CEO/founder of The Left – a new website “helping liberals survive the Trump era,” Adam Best posted an incredible video clip of an alt-right member attempting to rip apart an anti-fascism sign as liberals taunt him.

“This viral video of an alt-right bully failing miserably to rip up an anti-fascism sign as liberals masterfully drag him is the perfect real-life metaphor for political Twitter. Can’t stop watching it,” he tweeted along with the clip.

Liberals can be heard teasing him, asking if he goes to the gym. They also suggest he remove the lid of the garbage can and just toss the sign away.

Frustrated, at the end of the clip he can be seen folding the sign in half an walking away with it to the laughter of the liberals.

The video has been viewed nearly 2.5 million times at the time of the publication of this article with over 24K likes and nearly 10K comments.

Check it out, below:

This viral video of an alt-right bully failing miserably to rip up an anti-fascism sign as liberals masterfully drag him is the perfect real-life metaphor for political Twitter. Can't stop watching it. pic.twitter.com/JYDj9hjdHo

And speaking of the alt-right, recent reports suggest the movement is collapsing in on itself.

“Things have become a lot harder, and we paid a price for what happened in Charlottesville. . . . The question is whether there is going to be a third act,” said Spencer, who coined the name of the movement, which rose to prominence during the 2016 presidential campaign, advocates a whites-only ethno-state and has posted racist, anti-Semitic and misogynistic memes across the Internet.

“It is now time for me to lawyer up,” he continued, adding: “I am under attack. Losing this case would be catastrophic for our movement, for everyone engaged in dissident politics, to be honest.”