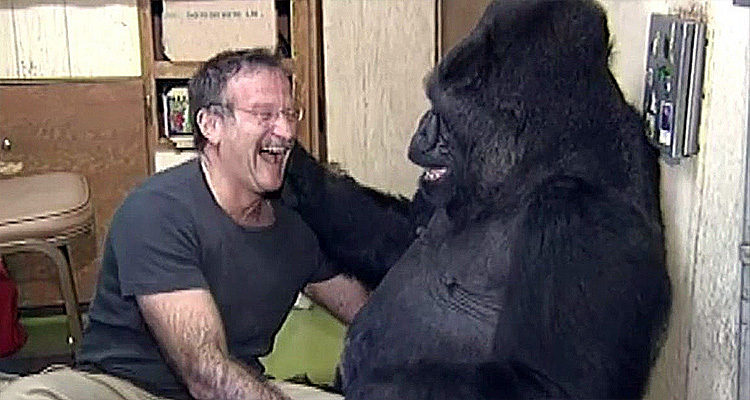 Sadly, National Geographic reported this week that Koko, the cat loving gorilla who knew sign language, died in her sleep.

She became an international celebrity during the course of her life, with a vocabulary of more than 1,000 signs and the ability to understand 2,000 words of spoken English, according to The Gorilla Foundation.

National Geographic magazine featured Koko of its cover twice: First in October 1978, with a photograph that she took of herself in a mirror (perhaps making it one of the earliest prominent animal selfies). She also appeared a second time on the cover in January 1985, in a story about Koko and her pet kitten.

“Because she was smart enough to comprehend and use aspects of our language, Koko could show us what all great apes are capable of: reasoning about their world, and loving and grieving the other beings to whom they become attached,” Barbara King, a professor emerita of anthropology at the College of William and Mary, says by email.

“Equally importantly, though, she raised our awareness of the costs to animal individuals of our scientific curiosity about other sentient lives,” says King, author of How Animals Grieve.

Koko the Gorilla knew American sign-language and had a vocabulary of over 1,000 signs. She also was said to have understood 2,000 words of spoken English.

Robin Williams had the most amazing opportunity to hang out with Koko in a 2001 video in which she played with Williams and tried on his glasses.

As their time together progressed, Koko started to pat different parts of her body to illustrate that she wanted Williams to tickle her. Eventually they fell into a tickle fight, and you can see her smiling.

It’s so beautiful and wonderful to watch. See more at Koko.org.

The Gorilla Foundation said it a statement that it “will continue to honor Koko’s legacy and advance our mission” by studying sign language in great apes and pursuing conservation projects in Africa and elsewhere.

She will surely be missed.