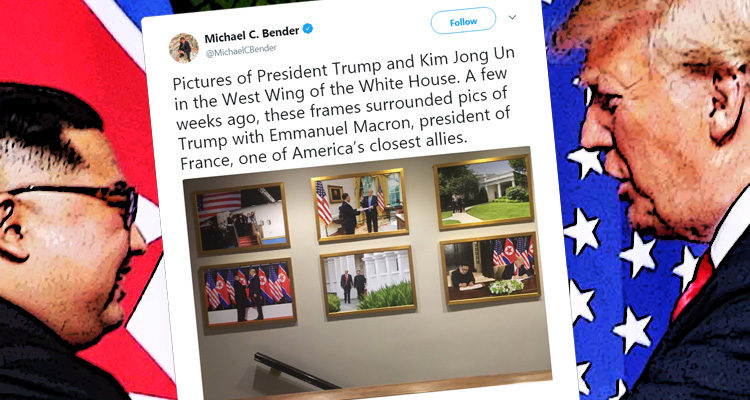 Unbelievable that a U.S. president would adore a dictator so much that he would hang his photos in the White House.

Trump has managed to alienate the United States from our closest allies after his withdrawal from the Trans-Pacific Partnership, the Paris Agreement and his violation of the Iran Nuclear deal to say nothing of his recent trade wars and his policy of separating migrant children from their parents as a means of deterring immigration.

However, as Newsweek reported, Trump doesn’t have any trouble with countries that have been aligned against United States’ interests such as North Korea.

Trump’s warm relations with North Korean dictator Kim Jong Un have now extended to the decoration of the White House, with photos of the two men’s historic meeting last week adorning the West Wing. And, in a move that symbolically resembles the president’s cooler relations with the United States’s chief allies, the photos of Trump and Kim have replaced those of Trump together with French President Emmanuel Macron.

Michael C. Bender, White House reporter for The Wall Street Journal, posted an image of the photos adorning the top of a West Wing staircase this week.

Pictures of President Trump and Kim Jong Un in the West Wing of the White House. A few weeks ago, these frames surrounded pics of Trump with Emmanuel Macron, president of France, one of America’s closest allies. pic.twitter.com/RZja99SDnJ

Jennifer Jacobs, his counterpart at Bloomberg, posted an image of French President Emmanuel Macron’s photographs in the same location up until the change.

The French love is still evident in the White House.

Pictures of Trump and Macron still up in the West Wing, a week after the big visit. @EmmanuelMacron pic.twitter.com/emENEEUvuL

The Evening Standard elaborated on the new photographs, reporting that:

Images include the moment Kim and Mr Trump signed an agreement committing to denuclearisation. Another photo shows US citizens returning home after being released from prison in North Korea.

The wall also includes an image taken during a visit from the top North Korean aide Kim Yong Chol to the White House, where he delivered a letter from Kim Jong-un pledging to go ahead with the summit in Singapore.

Continuing their coverage, Newsweek reminded readers of Trump’s apparent ongoing bromance with Kim Jung-un, to include his declaration last week on Fox News that he wanted his “people” to respect him the same way Kim Jung-un’s people respect him.

“He’s the head of a country, and I mean he’s the strong head,” Trump said. “Don’t let anyone think anything different. He speaks and his people sit up at attention. I want my people to do the same.”