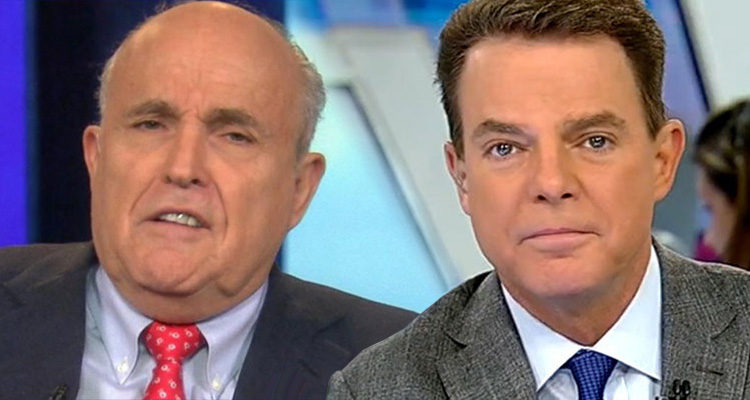 Shepard Smith stands out like a sore thumb on Trump’s favorite network Fox News for consistently taking to the airwaves to fact-check many of the myths promoted by team Trump.

Wednesday was the most recent example, when Smith debunked a talking point used to attack former CIA Director John Brennan – one of the individuals who helped initiate the investigation into possible Russian interference during the 2016 election.

In a segment on Wednesday evening, Smith confronted the claims made by Donald Trump and members of his inner circle, including his personal attorney Rudy Giuliani, that the Mueller investigation began when the dossier was released.

Smith began by showing a clip of Brennan speaking out against Trump during a Tuesday interview with MSNBC’s Lawrence O’Donnell.

“I think that Donald Trump has badly sullied the reputation of the office of the president with his invective, with his constant disregard for even decency as well as his befriending of autocratic leaders around the world.” Brennan stated later adding that Trump, “I think, is the most divisive president we have ever had in the Oval Office.”

Smith then played a clip of Giuliani speaking with Fox News host Sean Hannity on Monday, telling him that Brennan “should face a grand jury for his role in peddling the salacious Trump Dossier,” that he claimed kicked off the Russia investigation.

Much of Giuliani’s attack on Brennan involved the dossier compiled by the former British spy Christopher Steele that the administration has repeatedly asserted was what began the Russia investigation. It was not. The Russia investigation began after the former Trump policy adviser George Papadopoulos told an Australian diplomat that the Russians had dirt on his then-political opponent, Hillary Clinton. That information was passed on to intelligence officials.

Guliani calls that dossier laughable. For context, the research in the dossier includes 17 memos produced by the former spy Christopher Steele. They allege misconduct and a conspiracy between members of the Trump campaign and the Russian government during the 2016 election. Some assertions in the dossier have been confirmed. Other parts are unconfirmed. None of the dossier, to Fox News’ knowledge, has been disproven. That said, the battle lines were drawn between John Brennan and President Trump. The president’s defenders attacking John Brennan, with Brennan attacking the president. Today, just a short time ago, reporters asked the president’s spokesperson, Sarah Sanders, whether he is trying to silence his enemies.

“BREAKING: Trump revokes former CIA Director John Brennan’s security clearance in a lengthy statement that attacks Brennan’s ‘erratic’ behavior and lack of ‘credibility’ in a TRANSPARENT attempt to damage his professional reputation in advance of him being a witness against Trump,” he tweeted, adding: “This pretextual action echoes the firing of Jim Comey: termination of a long-serving public servant’s authority and/or access to information solely on the basis of that public servant’s positioning in the Russia probe with respect to Trump and his aides, allies and associates.”

You can watch Smith’s remarks in the clip, below: