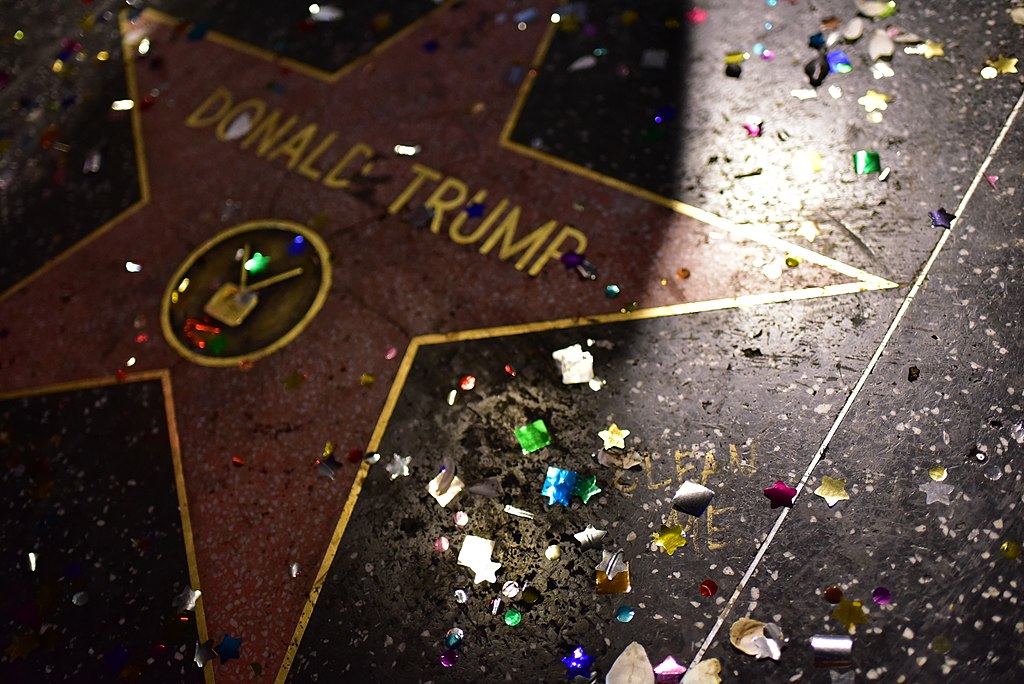 West Hollywood’s five-member city council passed the measure unanimously on Monday evening, allowing it to move forward with a request to remove the star, which has been vandalized several times since Trump took office last year.

Continuing, ABC News reported that: “the proposal cited the president’s treatment of women and his views on climate change as catalysts,” for consideration of the proposal.

Ahead of Monday’s vote, the West Hollywood City Council stated that:

Similar to how certain members of the entertainment community have been removed from the Academy of Motion Pictures, due to their actions toward women, reflecting a stance on their values by the Academy, this is an opportunity for decision-makers to take a stand on their values in support of women and against disturbing treatment of women.

The most recent incident of Trump’s Hollywood Walk of Fame star being destroyed was on July the 25th of this year.

ABC News reported on the incident at the time:

Trump’s star on the Hollywood Walk of Fame was destroyed early [Wednesday] morning, ABC-owned station KABC-TV reported. According to witnesses, a man removed a pickax from a guitar case about 3 a.m. local time and smashed the red marble marker bearing the president’s name on Hollywood Boulevard.

After an anti-POTUS protester reduced the Trump star to rubble using a pickaxe, two men dressed as Russian guards were spotted on the Walk of Fame protecting the remnants of the Hollywood monument.

The protectors received their fifteen minutes of fame after they were filmed sporting green knee length coats, fur-trimmed hats and holding up a Russian flag amid sweltering heat in Los Angeles.

For those unfamiliar with the news agency, Sputnik, formerly known as “The Voice of Russia,” is an arm of the Russia’s government-owned news agency Rossiya Segodnya – making it an official voice of the Kremlin.

Sputnik was kind enough to include some video footage of the spectacle:

These two guys stood guard over Trump's Walk of Fame Star and its hilarious. pic.twitter.com/mEhqRXWVVt

Sputnik followed up by mocking Trump about a recent report out of the Colorado State Assembly House, reporting that: “Meanwhile, the Colorado state Capitol Hall was hit by an unidentified prankster, who placed a portrait of Russian President Vladimir Putin in a space designated for Donald Trump.”

And, true to form, they provided a photo of that embarrassing moment for Trump:

As seen in the Colorado State Capitol Hall of Presidential Portraits today…#putinpotus pic.twitter.com/cW2cmqtmWM

Not yet finished with Trump, Sputnik went on to report that the wall space was empty due to an apparent lack of interest:

Putin’s portrait was reportedly put up on an easel underneath a wall of paintings of US Presidents, including George W. Bush and Barack Obama, and was later removed by a tour guide.

The spot, intended for Trump’s portrait, is reportedly empty because of a lack of donations made to the Colorado Citizens for Culture – the group that pays for presidential paintings.

According to local TV stations, the group had not received any donations to raise the $10,000 needed for Trump’s portrait, with its president Jay Seller saying that normally it took about four months to collect the money for the paintings of his predecessors.