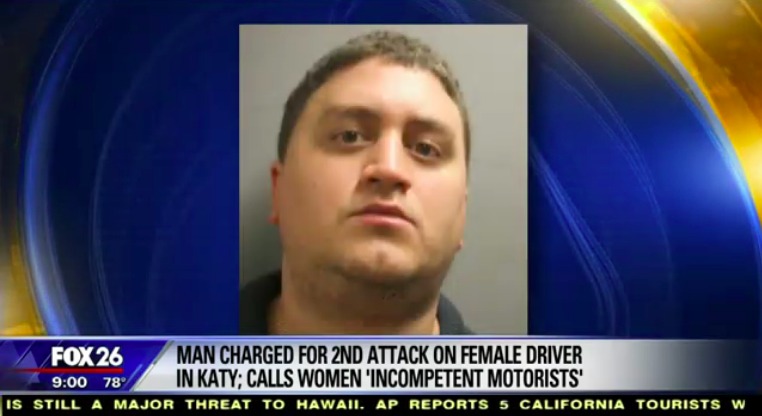 29-year-old Nicholas D’Agostino of Katy, Texas is behind bars for repeatedly shooting at female drivers out of his hatred toward women.

Houston’s Fox 26 reports that Harris County prosecutors say D’Agostino was acting on his hatred towards women drivers, and they’ve cited a number of social media posts in which he complained about their incompetence. “A Harris County Sheriff’s deputy investigating the incidents described D’Agostino as having a ‘very dim view of women.’”

Another local news outlet, KHOU 11, reported that a Harris County prosecutor said in court, “He rants and rambles about female motorists and how incompetent they are, and how their sole purpose in life is to give birth to male children.”

D’Agostino allegedly shot an unnamed woman on March 7, who was leaving a gas station. The woman said she heard a loud noise and then felt pain in her arm. She hadn’t realized she had been shot until later on.

The man told local affiliate ABC 13 that his choice to open fire was out of self-defense, saying the woman who was driving was swerving toward him and that she didn’t apologize.

D’Agostino allegedly shot another woman who was driving into a car wash on July 10, and the bullet from his .45 caliber hand gun missed her head by a few millimeters.

The Texas man now faces a charge of aggravated assault with a deadly weapon for the March shooting. A few days before his arrest, he’d been released on $75,000 bail for the July shooting. Both incidents involved female drivers.

After D’Agostino was arrested, he confessed to five other shootings related to road-rage. His bail is now set at $250,000.

From Fox 26: “Authorities believe there were 3 shooting incidents of women by D’Agostino. Only two women were wounded, and all of these incidents happened in Katy. Harris County deputies have been able to uncover new disturbing details during their investigation.”