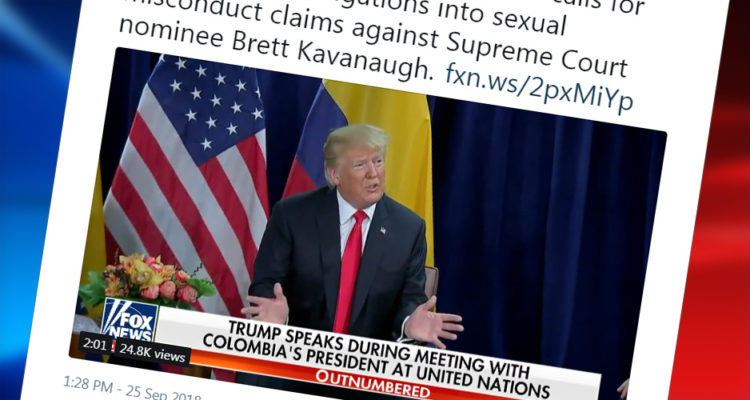 Donald Trump appeared to concede that Brett Kavanaugh is not going to end up being confirmed to the Supreme Court.

The Hill reported that: “Trump on Tuesday went after the second woman who has come forward to accuse Supreme Court nominee Brett Kavanaugh of sexual misconduct, suggesting she lacks credibility in part because she was intoxicated during the alleged incident.”

Deborah Ramirez alleges that Kavanaugh exposed himself and thrust his genitals in her face at a college party during their freshman year at Yale in the 1980s. She acknowledged in her account to The New Yorker that she had been drinking prior to the alleged incident, and had gaps in her memory of the event.

“The second accuser has nothing,” Trump told reporters during a meeting with the Colombian president at the U.N. General Assembly in New York on Tuesday.

“There were gaps. She said she was totally inebriated, and she was all messed up, and she doesn’t know it was him, but it might’ve been him, oh gee, let’s not make him a Supreme Court judge because of that,” he said of Ramirez.

Trump also went after Democrats, calling the accusations against Kavanaugh “a con game being played by the Democrats.”

However, a follow-up remark by Trump appeared to admit that Kavanaugh will not end up on the Supreme Court once things have concluded.

CNN reported that Trump stated that:

The second accuser has nothing. The second accuser doesn’t even know — she thinks maybe it could’ve been him, maybe not, she admits that she was drunk, she admits time lapses, there were time lapses. This is a person and this is a serious statement that’s going to take one of the most talented, one of the greatest intellects from a judicial standpoint, going to keep him off the United States Supreme Court.” [emphasis added]

Conservative website, The Daily Caller, also confirmed the remarks; and as soon as a video becomes available of the full press conference, we will add it.

And those remarks are consistent with a Monday report by Vanity Fair regarding Trump’s state of mind regarding the Kavanaugh nomination.

According to Vanity Fair:

On Monday morning, a Republican briefed on Trump’s thinking said the president has been considering pulling Kavanaugh’s nomination.

According to the source, Trump allies are imploring him to cut Kavanaugh loose for the sake of saving Republicans’ electoral chances in the midterms. The argument these advisers are making is that if Kavanaugh’s nomination fails, demoralized Republicans will stay home in November, and Democrats will take the House and the Senate and initiate impeachment proceedings. The end result: Trump will be removed from office. “The stakes are that high,” the source said. Another Republican adviser told me: “Trump is very worried now, and is finally waking up that it’s the end of his presidency if he loses the Senate.” Trump’s outside allies are advising him to nominate Amy Coney Barrett and fast-track her confirmation before the midterms. “Some in the White House think you can only appoint a woman now,” a former administration official told me. An outside adviser added: “Democrats won’t be able to pivot fast enough to attack her, since she’s a woman.”