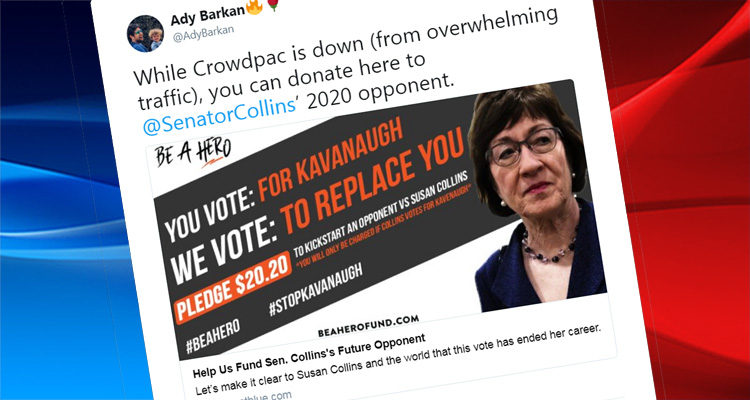 A crowd-funding website vowing to unseat Susan Collins in 2020 crashed on Friday due to a surge in traffic while she was giving her Senate floor speech.

As NBC News reported, Collins went further than Trump with her defense of Kavanaugh.

Though Trump ridiculed Ford from the stump in Mississippi Tuesday and has long bemoaned the treatment of Kavanaugh by Democrats and the national news media, he never delivered the killer sound bite that he simply didn’t believe Ford.

Collins went further than Trump — and, because she was more measured, her words were more cutting.

However, there were immediate consequences. Truth Dig reported that a crowd-funding website crashed while Collins was delivering her Senate floor speech due to a surge in traffic and donations.

A crowd-sourced fund to unseat Republican Sen. Susan Collins of Maine in 2020 crashed Friday afternoon after traffic spiked and donations surged as she was delivering a speech on the Senate floor explaining why she would join nearly all of her GOP colleagues in voting “yes” on controversial Supreme Court nominee Brett Kavanaugh.

On the campaign funding platform Crowdpac, father and activist Ady Barkan joined forces with advocacy groups Maine People’s Alliance and Mainers for Accountable Leadership to raise pledges for Collins’ not-yet identified Democratic opponent if she supported President Donald Trump’s high court pick. As of at 3:40pm ET Friday, it had raised $2,020,366 in pledges, an increase from the $1,804,551 it had amassed by Wednesday. A week ago, the total was $1,605,18.

Barkan did set up an alternate fund for donors to use while the original Crowdpac website was down.

While Crowdpac is down (from overwhelming traffic), you can donate here to @SenatorCollins’ 2020 opponent.https://t.co/WsijVuCSc9

The campaign explained that if Collins votes “NO” to Kavanaugh’s nomination no money will be collected. However if she votes “YES,” donors “pledge will go to her opponent’s campaign, once that opponent has been identified.”

The people of Maine want to be clear with you, Senator Collins:

The pending nomination of Brett Kavanaugh for Supreme Court Justice is a threat to everyday Mainers like us. Kavanaugh is committed to ending healthcare for people with pre-existing conditions. He is committed to overturning Roe v. Wade. Kavanaugh cannot be nominated – he would mean bankruptcy and danger for millions of families in Maine and America.

The people of Maine are asking you to be a hero, Senator Collins.

Your swing vote could decide whether a rubber stamp for Trump’s anti-healthcare, anti-woman, anti-labor agenda gets confirmed to the Supreme Court–costing millions of Americans their healthcare, their right to choose, and their lives.

If you fail to stand up for the people of Maine and for Americans across the country, every dollar donated to this campaign will go to your eventual Democratic opponent in 2020.  We will get you out of office.

The New York Times elaborated on the political fallout regarding Collin’s decision to support Kavanaugh’s confirmation to the Supreme Court:

The stance of Ms. Collins, who would be up for re-election in 2020, comes at great political risk to a lawmaker who was already besieged by protesters branding her a turncoat on women’s rights. Her pivotal backing of Judge Kavanaugh… is already inspiring candidates to say they will run against her.

And if she is wrong about Judge Kavanaugh and he joins an effort to overturn Roe, the health care law or other progressive policies, she would no doubt be held responsible.