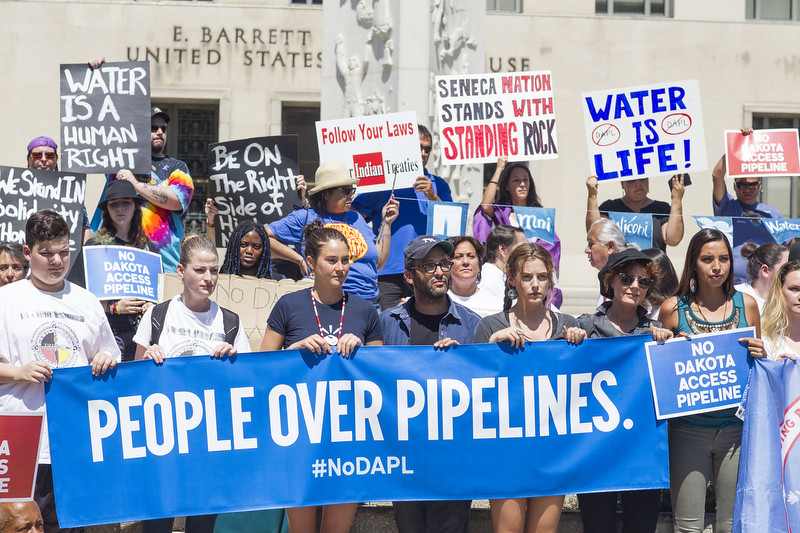 The Dakota Access Pipeline Project, otherwise known as the Bakken Pipeline, is an underground pipeline spanning approximately 1,172 miles that will eventually connect the Bakken and Three Forks oil fields of North Dakota to a hub in Patoka, Illinois, passing through South Dakota and Iowa along the way. From there, it could connect to existing pipelines for transfer for refinement or export or could be sent to Midwest and East Coast markets by truck and rail.

The pipeline has become controversial regarding its necessity, its environmental impact, and the use of eminent domain (the right of a government or its agent – in this instance Energy Transfer Partners who are heading the joint venture – to expropriate private property for public use, with payment of compensation).

As Time Magazine reported last week, “A growing group of indigenous people, climate activists and landowners have been protesting” the pipeline “since the project was first announced in 2014.” However, the project only entered public consciousness after “thousands of protesters gathered at the site.”

Then something extraordinary happened. The Atlantic reported last Friday that opponents of the project won a “provisional victory” after three federal agencies asked the pipeline’s partners to “voluntarily” pause work on a segment of the pipeline that “tribal officials say holds sacred sites and artifacts,” mere minutes after Judge Boasberg ordered construction continued.

“Construction of the pipeline on Army Corps land bordering or under Lake Oahe will not go forward at this time,” said a joint statement from the Departments of Justice, Interior, and the U.S. Army. “We request that the pipeline company voluntarily pause all construction activity within 20 miles east or west of Lake Oahe.”

Despite the fact that the relief  was only “provisional” based on this request for a “voluntary pause,” independent news sites were quick to declare absolute victory publishing click-bait articles with titles declaring that “Obama Just Killed The Dakota Access Pipeline.”

And, although these websites had been openly supporting the struggle to halt construction of the pipeline, they unwittingly (at least we hope so) may have guaranteed the eventual success of the pipeline by declaring victory and diverting attention away from the controversy.

Kelly Hayes, an activist and co-founding member of The Chicago Light Brigade and an organizer with We Charge Genocide, elaborated on this new threat created by irresponsible news coverage on her website Transformative Spaces.

Hayes, “the child of a father who had been removed from the Menominee Reservation prior to the American Indian Child Welfare Act,” writes that national attention was finally being paid to the story of the protests against the pipeline due to “growing social media amplification and independent news coverage.” However, as soon as the Obama administration issued their joint statement things turned for the worse.

Then something happened. Headlines like, “Obama administration orders ND pipeline construction to stop” and “The Obama Administration Steps In to Block the Dakota Access Pipeline” began to fill my newsfeed, with comments like “Thank God for Obama!” attached to them.

“Clearly, a major plot twist has occurred. But it’s not the one that’s being sold,” she wrote, explaining that if you “read the fine print in the presently lauded joint statement,” it becomes crystal clear that construction of the pipeline is merely “on hold at Lake Oahe until the powers that be think it through some more — with no assurances about how they’ll feel when it’s all said and done. The rest is a voluntary ask being extended to the company.”

“Let’s reflect on that for a moment,” Hayes continues. “A company that recently sicced dogs on Water Protectors, including families, who stepped onto a sacred site to prevent its destruction, is being asked to voluntarily do the right thing.”

And as Hayes continues – “they probably will. For a moment.” With all the recent media buzz, laying low for a bit to allow “any accumulated organizing momentum” on the part of the protesters to fade away and then, when no one is looking, when the media is no longer reporting on the issue – once victory has been decried and the public quits paying any attention….. That is the time to restart construction on the pipeline. For, as Hayes explains, what’s being asked of the pipeline company “isn’t an actual reroute…. all that’s being asked is that they play their part in a short term political performance aimed at letting the air out of a movement’s tires.”

And as Hayes concludes, construction will likely halt “for a (very) little while” while the pipeline builders “wait for the media traction that’s been gained to dissipate, and for the #NoDAPL hashtag to get quieter. They’ll wait until the political moment is less fraught, and their opposition is less amped. And then they will get back to work — if we allow it.”

Here’s the real story: This fight has neither been won nor lost. Our people are rising and they are strong. But the illusion of victory is a dangerous thing. Some embrace it because they don’t know better, some because they need to. We all want happy endings. Hell, I long for them, and I get tired waiting. But if you raise a glass to Obama and declare this battle won, you are erasing a battle that isn’t over yet. And by erasing an ongoing struggle, you’re helping to build a pipeline.