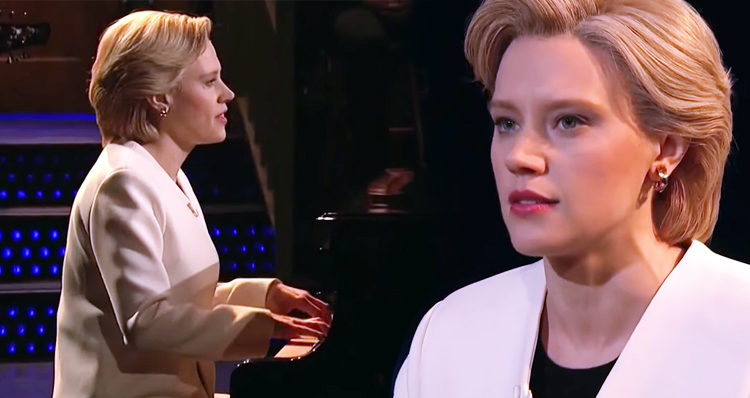 There are too many reasons to cry as Kate McKinnon sang Hallelujah in Saturday Night Live’s cold open.

Kate McKinnon sat down at a piano to pay tribute to singer-songwriter Leonard Cohen for the show’s first episode since the fateful presidential election.

As Yahoo News reports, it was “the exact perfect and heartbreakingly beautiful thing we needed in our lives after the unmitigated hellscape that has been election week.”

Dressed in the pantsuit and sensible hairstyle we’ve seen her rocking as Hillary Clinton on SNL all debate season, Kate McKinnon sang “Hallelujah,” an iconically haunting song written and performed by Leonard Cohen, who died November 7 at age 82. While the song is one of the most oft-covered tunes ever (we can talk about Jeff Buckley’s cover of “Hallelujah” another day because we seriously cannot stand to cry anymore right now), McKinnon’s rendition, in that costume, at this moment, on that show, was so perfect and poignant that it literally hurts to watch.

McKinnon ended her somber performance of the iconic emotional hit with the message: “I’m not giving up and neither should you.”

The performance was widely praised on social media with many tweeting that it brought them to tears.

That opening will go down as an iconic moment in #SNL history. Thank you, Kate McKinnon. Thank you, Hillary. @nbcsnl #ImWithHer