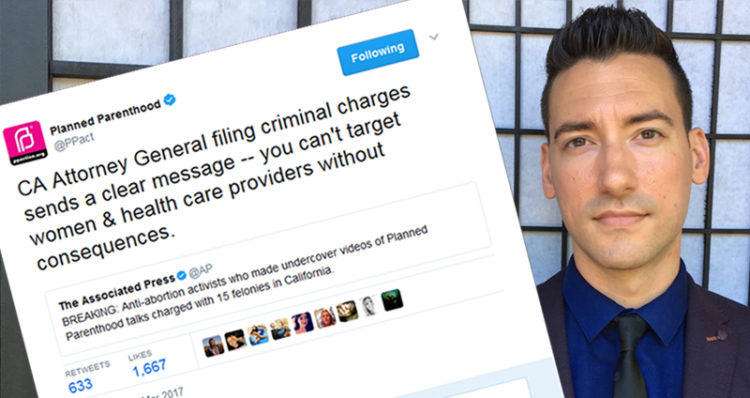 California Attorney General Xavier Becerra announced on Tuesday that David Robert Daleiden and Sandra Susan Merritt have been charged with 15 felony counts of invasion of privacy. Prosecutors filed 14 felony counts of unlawfully recording people without their permission — one count for each person — as well as one count of conspiracy to invade privacy.

The Associated Press reports that “The allegations said the pair filmed 14 people without their consent between October 2013 and July 2015, most of them in San Francisco and Los Angeles counties.” Prosecutors filed 14 felony counts of unlawfully recording people without their permission — one count for each person — as well as one count of conspiracy to invade privacy.

“The right to privacy is a cornerstone of California’s Constitution, and a right that is foundational in a free democratic society,” Becerra continued, adding: “We will not tolerate the criminal recording of confidential conversations.”

The Los Angeles Times reports that Daleiden released a statement shortly after charges were filed through his organization, Center for Medical Progress, blasting prosecutors:

“The bogus charges from Planned Parenthood’s political cronies are fake news. We look forward to showing the entire world what is on our yet-unreleased video tapes of Planned Parenthood’s criminal baby body parts enterprise, in vindication of the First Amendment rights of all.”

The Los Angeles Times also reports that “Mary Alice Carter, a spokeswoman for Planned Parenthood Federation of America, said in a statement late Tuesday that the charges against Daleiden and Merritt ‘sends a clear message’ that targeting healthcare providers brings consequences.”

“As we have said from the beginning, and as more than a dozen different state investigations have made clear: Planned Parenthood has done nothing wrong, and the only people who broke the law are those behind the fraudulent tapes.”

The New England Journal of Medicine published several articles in 2015 about the controversy surrounding those videos. Three medical doctors and a juris doctor contributed their expert views and perspectives about fetal tissue research, and the Planned Parenthood organization. Here are some excerpts from those articles:

Planned Parenthood President Cecile Richards added at the time that:

These pieces are further proof of what we already know: Objective media voices, doctors, medical experts — and above all, the millions of patients who have received compassionate, high-quality care at Planned Parenthood health centers — are standing with Planned Parenthood. We have protected women’s health for generations, and we’re not going to stop, no matter what.