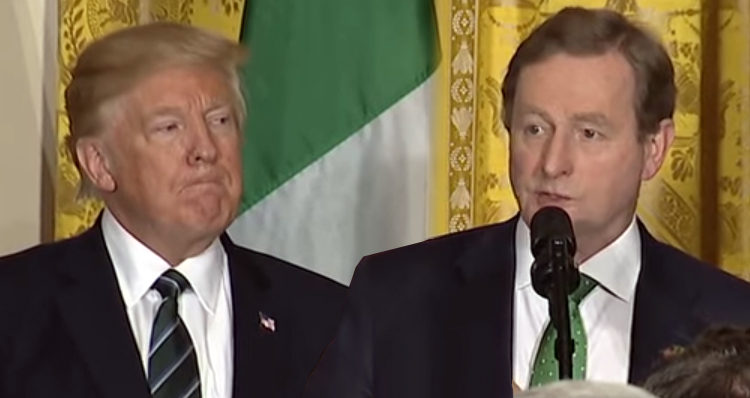 Enda Kenny, the Irish prime minister, used his Saint Patrick’s Day meeting with Trump as an opportunity to lecture the bigoted billionaire about the contribution of Irish immigrant population in the United States.

As The New York Times reports, “the annual visit by the taoiseach [prime minister] of Ireland to mark St. Patrick’s Day should have been a delightful distraction for President Trump,” however, “on [Friday], Mr. Trump found himself in a roomful of kelly-green-clad lawmakers in the Capitol for the Friends of Ireland luncheon, being lectured by Enda Kenny… about the virtues of America’s immigrant legacy and the contributions that immigrants had made to the country.”

“There are millions out there who want to play their part for America — if you like, who want to make America great,” he said, shooting Mr. Trump a pointed gaze as he appropriated the president’s campaign slogan. “You heard that before?” he said, to nervous titters.

Turning his attention to the estimated 50,000 Irish who are living in the United States illegally, he continued.

“We would like this to be sorted,” Mr. Kenny said, calling for these people to be given a path to citizenship. “It would remove a burden of so many that they could now stand in the light and say, ‘Now I’m free to contribute to America as I know I can.’ That’s what people want.”

“All they want is the opportunity to be free,” he added, choking up momentarily.

Kenny also tore into Trump during a press conference, lecturing him about immigrants with Trump awkwardly standing next to him.

“It’s fitting that we gather here each year to celebrate St. Patrick and his legacy,” Kenny said, adding “He, too, was an immigrant. And even though he is, of course, the patron saint of Ireland, for many people around the globe, he is also the symbol of – indeed, the patron of – immigrants.”

“Ireland came to America, because deprived of liberty, opportunity, safety and even food itself, we believed. Four decades before Lady Liberty lifted her lamp we were the wretched refuse on the teeming shore.

“We lived the words of JFK long before he uttered them – we asked not what America could do for us but what we could do for America. And we still do.

“We want to give and not to take.”