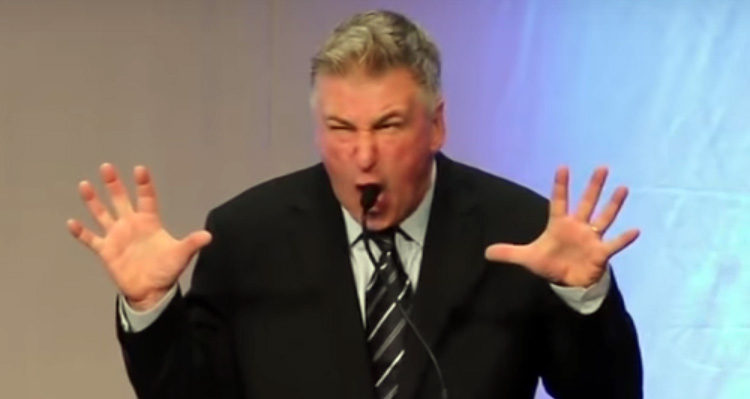 “I still choke down those words every day – ‘President Trump’,” Baldwin told the crowd. “I would love to never ever inhabit the brain of Donald Trump again.”

Slipping into his Trump character, Baldwin told the Iowa audience: “I’m sorry if I offended anyone, especially Pocahontas, who’s of course a smoking hot cartoon character.”

Baldwin’s apology on behalf of Trump was in reference to a racist slur he made to Navajo code-talkers who were visiting the White House.

“You were here long before any of us were here. Although we have a representative in Congress who they say was here a long time ago. They call her Pocahontas,” Trump said, referring to Democratic Massachusetts Sen. Elizabeth Warren.

Worse yet, as NBC News explained, Trump “spoke under the watchful eye of a portrait of President Andrew Jackson, known for his forceful removals of Native Americans from their ancestral lands.”

Reporting on the rest of Baldwin’s speech, NBC News added that:

Baldwin was otherwise serious throughout the speech, urging the party to come together in Iowa after the bruising battle between Hillary Clinton and Sen. Bernie Sanders of Vermont in the leadup to the state’s 2016 first-in-the-nation caucuses. Baldwin said he and other Democrats had been too complacent in 2016 and that a lack of engagement may have cost Hillary Clinton the election.

The fall fundraiser for the party has been a key event to launch presidential campaigns. Both Sens. Barack Obama and Jon Kerry attended the event prior to the Iowa Caucus in 2008 and 2004.