November 7, 2017 by Samuel Warde No Comments 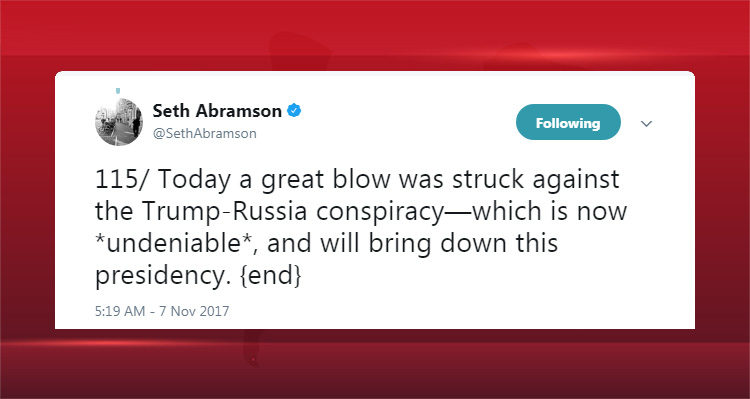 Attorney and University of New Hampshire professor Seth Abramson has been publishing extensive tweets regarding the Trump-Russia conspiracy for months now; and, while he has his critics, he has been correct on most of his assessments.

Abramson – a former public defender – has an impressive resume. As his website notes:

Abramson published a massive megathread on Twitter regarding the House Permanent Select Committee on Intelligence‘s release of the 208* page transcript of the committee’s November 2, 2017 hearing with Trump’s former foreign policy adviser, Carter Page. [* while the transcript itself is 208 pages, the full document as released by the committee is 243 pages in total.]

Abramson concluded, after posting more than 100 tweets, that:

Today a great blow was struck against the Trump-Russia conspiracy—which is now *undeniable*, and will bring down this presidency.

In broad terms, some of the key points in Abramson’s analysis included the following:

Abramson, himself, identified 8 “bombshells” from Page’s testimony that would lead to the end of the Trump regime. In Abramson’s words:

The picture of what happened between Trump and Russia is now getting *very* clear despite it *still* being early- to mid-investigation. What we saw in this transcript was enough scandal—proof of WH and Trump campaign lies—for 10 administrations. And Mueller knows *more*.

Abramson also posted a series of what he called “Major Reveals.”

Be sure to check Abramson’s Twitter page for his ongoing point-by-point mega-thread regarding the Trump-Russia investigation.