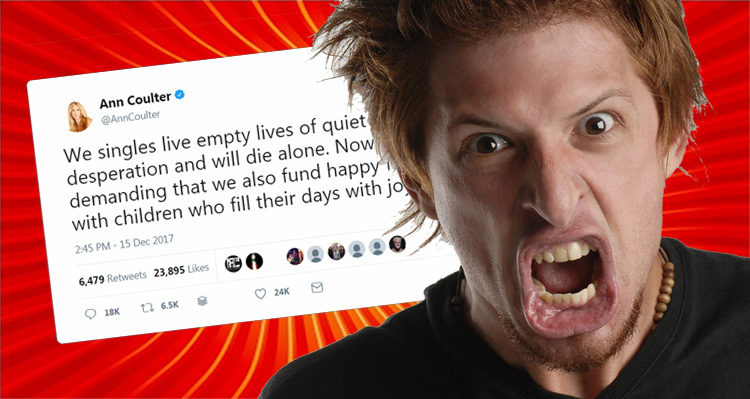 A Twitter-storm was unleashed after conservative pundit Ann Coulter posted a bizarre tweet about being single.

Conservative pundit Ann Coulter is no stranger to mockery.

Never one to shy away from an opportunity to publicly embarrass herself, Coulter stepped back into the fray last Friday in a rather strange rash of tweets initially directed at Marco Rubio, who had thrown a wrench into the Republican effort to pass their beloved tax break for the rich the day before.

As The Atlantic reported at the time, “For weeks, Marco Rubio has been prodding Republican leaders to tilt the party’s tax overhaul ever-so-slightly away from corporations and the wealthy and more toward working families.” Rubio had been supporting the bill even though Republicans were resisting his efforts, “But on Thursday afternoon, Rubio took his campaign an important step forward: He told top Republicans he’d vote against the final tax bill next week if they did not agree to his demands.”

However, it was her next tweet that set the internet on fire.

“We singles live empty lives of quiet desperation and will die alone. Now Rubio is demanding that we also fund happy families with children who fill their days with joy,” she tweeted.

We singles live empty lives of quiet desperation and will die alone. Now Rubio is demanding that we also fund happy families with children who fill their days with joy.

I know it is your own brand, but you need to cut back ! pic.twitter.com/aFppq85pOe

Girl bye. Pretty sure the point could have been made without single shaming. Speak for yourself. pic.twitter.com/mRSYxiSYHX

will you marry me?

I'm dead for real and your dead on the inside.

I think it would work.

Ever think, "Maybe I'm single because I'm an awful sadist who's only capable of being aroused by the suffering of brown people."? Just a thought.

Take solace in the knowledge that future generations will not speak your name, except perhaps as a cautionary tale.

Oh, lord. I am a 50-year-old single lesbian who lives alone with her cat and I am not this dramatic.

RU OKAY? DO WE NEED TO CALL A MENTAL HEALTH SPECIALIST?

If being single is such an empty life, have you considered being less of a horrible person? That might attract a mate