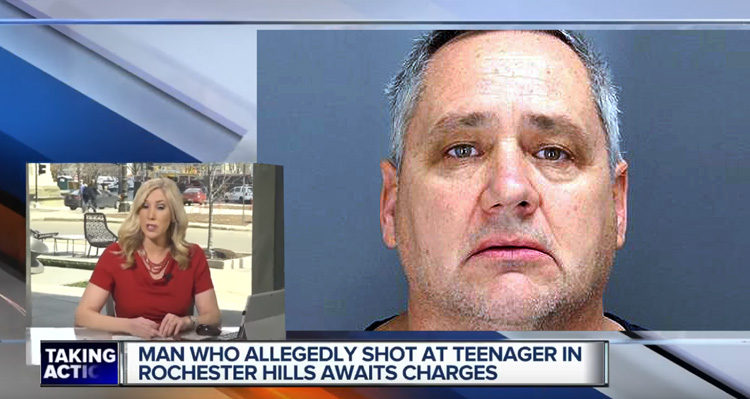 The walk to school turned terrifying for a Michigan teen who says he was shot at after he stopped to ask for directions. Fourteen-year-old Brennan Walker missed the bus and tried to walk to school, but got lost after he couldn’t remember the route.

Local Detroit Fox affiliate WJBK News reported over the weekend that a 14-year-old black “missed his bus and it nearly cost him his life.”

Things took a dangerous turn when Brennan Walker went looking for help at a Rochester Hills home Thursday morning and was confronted by a man with a gun.

Walker was trying to walk the bus route to Rochester High School after he woke up late and missed his bus. His mom had taken his phone away, so he didn’t have that with him to get directions. So he knocked on a stranger’s door for help — and almost paid for it with his life.

WJBK News talked to Brennan, who told them:

“I got to the house, and I knocked on the lady’s door. Then she started yelling at me and she was like, ‘Why are you trying to break into my house?’ I was trying to explain to her that I was trying to get directions to Rochester High. And she kept yelling at me. Then the guy came downstairs, and he grabbed the gun, I saw it and started to run. And that’s when I heard the gunshot.”

“My mom says that, black boys get shot because sometimes they don’t look their age, and I don’t look my age. I’m 14; but I don’t look 14. I’m kind of happy that, like, I didn’t become a statistic,” he says in retrospect.

NPR reported that the shooter, “Retired firefighter Jeffery Zeigler, 53, who is white, was arraigned on Friday ‘on assault with intent to murder and felony firearm’ charges, according to the Oakland County Sheriff’s Office.”

Oakland County Sheriff Michael Bouchard posted a statement on the sheriff’s office Facebook page stating: “I feel so bad for this mom and young man and am incredibly angry at this disturbing event in our county, state and country. We will seek all applicable charges. There is no world where this is acceptable.”

“Over the last 24 hours I’ve been working with the leadership of the Oakland County Sheriff’s Office and Rochester Community Schools and have been kept apprised of the terrible incident which occurred yesterday in one of our neighborhoods. While the City cannot officially comment on matters under investigation, I am personally sickened by the initial reports and they suggest behavior completely unacceptable and inconsistent with the character and values of our community. Our city has a strong and unwavering policy when it comes to acts of hatred. The key excerpt of that policy is referenced below. We stand by this position wholeheartedly and look forward to justice in this case.”

According to NPR, “Prosecutors reportedly said video from Zeigler’s home security system backs up the teenager’s story of what happened.”

The court set Zeigler’s bond at $50,000 with additional conditions, the AP says. He’s next due in court on April 24.