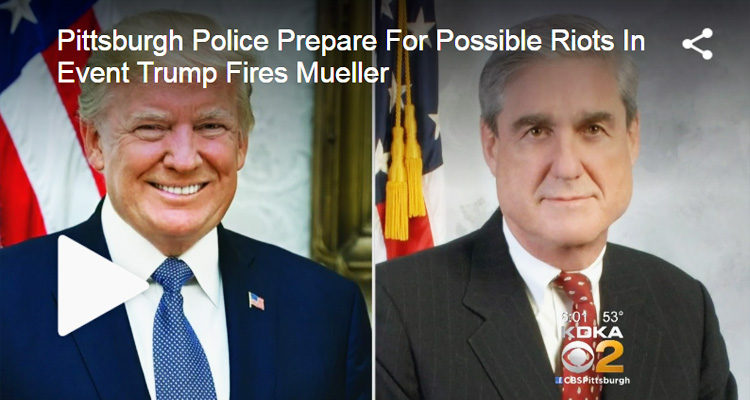 Victor Joseph, commander of the Pittsburgh Bureau of police, sent out an email memo this week instructing the department’s detectives to start bringing their full uniform and riot gear to work with them starting April 19th.

The email warned that protests would occur swiftly if Trump fires Mueller.

“There is a belief that President Trump will soon move to fire Special Prosecutor Mueller. This would result in a large protest within 24 hours of the firing,” the email stated.

Marcie Cipriani, a reporter for ABC affiliate WTAE-TV, elaborated on the email and provided a copy on her Twitter account.

“We may be needed to assist in the event that there is a large-scale protest,” the email stated. “Based on this information, beginning tomorrow, April 19, 2018 all major crimes detectives are required to bring a full uniform and any issued protective equipment (riot gear) with them to work until further notice.”

SOURCE: This is the email sent to Pgh detectives this morning. I am working to get a response from the city as well as additional details on the potential protests. #WTAE pic.twitter.com/xtOuUc220p

She also spoke with Pittsburgh Mayor Bill Peduto and confirmed the authenticity of the email, adding that the measure was precautionary.

Cipriani elaborated on her conversation in a subsequent tweet, writing: “Mayor Bill Peduto on why [Pittsburgh] police have been ordered to have riot gear on hand, if Special Prosecutor Robert Mueller is fired: ‘You want to be precautionary, especially on something that is unprecedented in American history.'”

Mayor Bill Peduto on why Pgh police have been ordered to have riot gear on hand, if Special Prosecutor Robert Mueller is fired: “You want to be precautionary, especially on something that is unprecedented in American history” #WTAE

“The Pittsburgh Bureau of Police receives information daily that we evaluate and prepare for if the event should occur. Events can include anything from extreme weather to potential demonstrations.

Often the events we prepare for do not occur. However, through an abundance of caution, we attempt to adequately prepare for an appropriate response.

“On a routine basis, we receive intelligence about potential problems that may occur in the city, whether it be weather-related, whether it be man-made, whether it be demonstrations, and we act accordingly and appropriately to have a plan in place.”