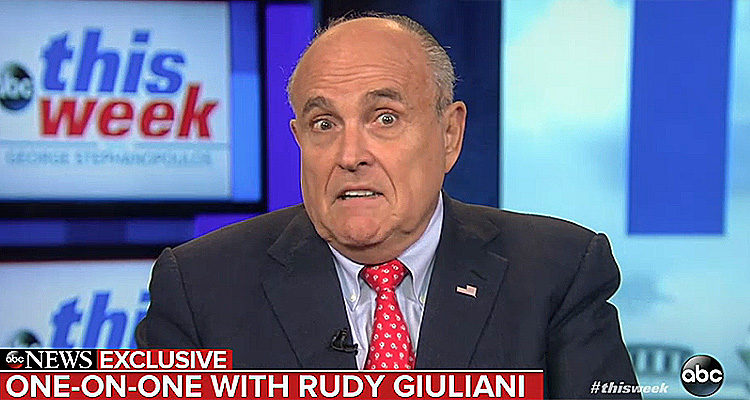 Fasten your seat belts, things are about to get crazy after Rudy Giuliani drops 4 huge bombshells during an interview with ABC News Sunday morning.

Trump’s top personal attorney, Rudy Giuliani, didn’t rule out Trump invoking the Fifth Amendment during a Sunday morning interview on ABC News, adding that Trump doesn’t have to comply with a subpoena should Special Prosecutor Robert Mueller issue one during the course of his investigation.

Asked whether he is confident that Trump will not invoke his Fifth Amendment right against self-incrimination by ABC News Chief Anchor George Stephanopoulos, Giuliani responded: “How can I be confident in that?”

Trump will not comply with Mueller Subpoena

Giuliani added: “I have a client who wants to testify … So he may testify and we may actually work things out with Bob Mueller.”

However, ABC News reported that:

The president’s lawyer also suggested he is cautious about having Trump sit down with Mueller. “Not after the way they’ve acted,” Giuliani said of the special counsel’s team. “I came into this case with a desire to [have the president talk to Mueller] and they just keep convincing me not to do it.”

Turning to the subject of Michael Cohen, ABC News reported that:

Giuliani also told Stephanopoulos on “This Week” that he expects Trump’s former, longtime personal lawyer, Michael Cohen, to cooperate with the Mueller investigation.

But Giuliani suggested he has no concerns about anything Cohen could say.

“Michael Cohen doesn’t have any incriminating evidence on the president or himself,” Giuliani said. “He’s an honest, honorable lawyer.”

CNN reported on the interview, adding that:

Giuliani said he does not know when Trump learned of the payment to Daniels, whose real name is Stephanie Clifford, and argued that he doesn’t “know if that’s relevant at all.”

Asked if Cohen has ever paid more women to keep them quiet, Giuliani said, “I have no knowledge of that, but I would think if it was necessary, yes.”